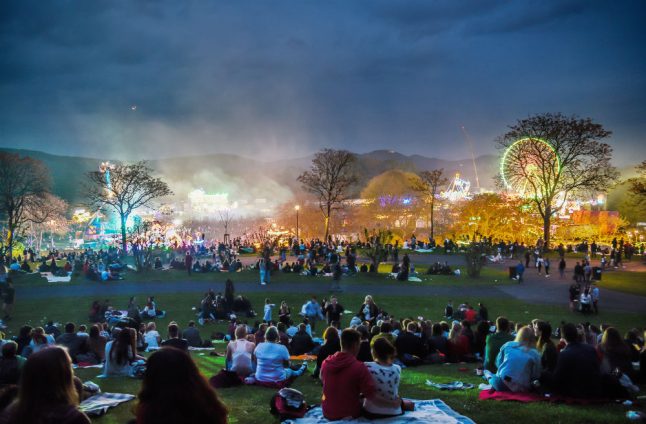 Visitors at Rhine in Flames in May. Photo: DPA.

Grab your paint powder and an old T-shirt to join crowds of revellers surrounded by a cloud of rainbow-coloured mist in Leverkusen, North Rhine-Westphalia.

Today it is widely celebrated in cities all over the world where thousands of people gather to bust out their best moves and throw paint at people.

And since the Holi festival in Hamburg on September 2nd and the one in Munich on September 3rd are both sold out, your last chance to get colourful with paint is in Leverkusen next weekend.

Why wouldn’t you want to throw colours at people whilst jamming to bands such as Die Atzen and Izzy Trixx? Live music will be spinning from noon until 10pm.

For boaters, all-around water sport enthusiasts or just about anyone interested in making a splash, Interboot is a unique event in Germany you'll just need to see for yourself.

Around 100 motor and sailboats directly at the Friedrichshafen harbour on Lake Constance will be available for a test ride. The wakeboard competition at Interboot in 2016. Photo: DPA.

There will also be activities on offer such as stand-up paddle boarding and wakeboarding. The less adventurous can look forward to watching other thrillseekers perform tricks in a wakeboard competition.

In its 56th edition this year, Interboot attracted a whopping 90,500 visitors last year. Not too shabby for an exhibition that goes all the way back to 1962.

We were just as surprised as you might have been to find out that an event dedicated to all things British existed in Germany.

On the second weekend of September, visitors interested in taking part in the British way of life may do so at the British Flair and Country Fair located at one of the oldest castles on the Lower Rhine – Linn Castle in Krefeld.

Foodies will be delighted to know that there’ll also be an expansive open-air shopping area where one can try out different kinds of single malt whiskies and eat fish and chips and fudge.

Prepare to be amazed as the sky explodes into glorious colour, when amazing fireworks cast a beautiful glow over the Rhine river and surrounding landmarks.

Meanwhile, a flotilla of 50 illuminated boats will cruise serenely down the river, creating stunning reflections on the water.

The Rhine will go up in flames of fireworks on September 9th in Oberwesel and on the 16th in the towns of St. Goar and St. Goarshausen.

The spectacle has been a tradition at the feet of the Loreley cliff by St. Goarshausen and the nearby romantic Rheinfels castle for over 60 years.

Accompanying the fireworks, there will be live music and a wine festival – what's not to love?

On only until 1st October, this month will be your last chance to catch a glimpse of the installations, sculptures and performances dotted across the university town of Münster at the city’s famed yet very rare Sculpture Projects art exhibition.

Only once every decade are artists from all over the world able to showcase their works in the city. The first edition took place in 1977 and since then, every ten years the exhibition has gotten bigger and better.

This year, 35 radical works create something like an outdoor sculptural playground suitable for adults and children alike. What’s more, entrance is free.

Ayse Erkmen's “On Water” is one installation you won’t want to miss. Erkmen set up a bridge that connects two sides of Münster's Dortmund-Ems canal so that visitors can try their hand at crossing it and while they're at it, appear to be walking on water.

40,000 runners from 100 different nations will race through the German capital for the 44th BMW Berlin Marathon later this month – a sight to truly behold.

Besides, one of the most versatile male long distance runners in history will be there, according to Running Magazine.

Kenenisa Bekele, who was also the winner of the 2016 Berlin Marathon with a time of 2:03:03, was recently added to this year’s list.

The athletes will take on 42 kilometres in this annual sporting event.

While the starting places have long been taken by professionals and amateurs alike, it's not too late for you to cheer for the contestants among a crowd of over one million people and turn this sports day into a party.