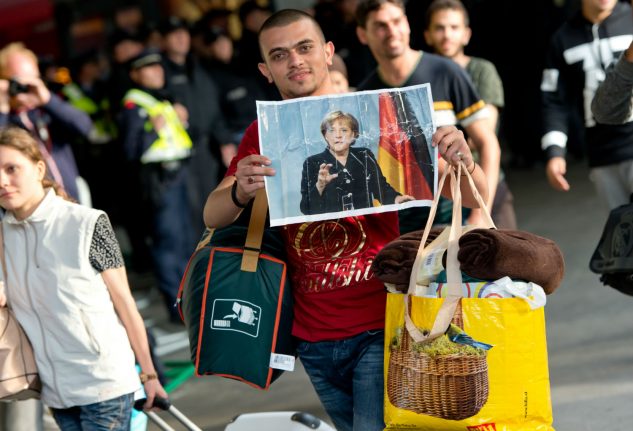 A refugee arrives in Munich in 2015 holding a picture of Merkel. Photo: DPA

1. Germany is a signatory to the 1951 Refugee Convention

Like all EU member states Germany is bound by the Convention on the Status of Refugees. The convention defines refugees as those who face persecution in their home country based on religion, race, sexuality, membership of a particular social group, or for holding certain political beliefs.

Germany has a duty to these people not to subject them to discriminatory laws and to offer them the chance to assimilate.

2. Germany is bound by the EU's “Dublin rules”

Germany is also a signatory of Dublin III, an EU agreement which sets out how member states deal with refugees who arrive in the country. According to the agreement asylum requests must be dealt with in the first country the refugee enters.

This agreement is controversial as it puts a disproportionate pressure on countries like Italy and Greece which have external EU borders, while protecting countries like Germany which are surrounded by other EU members.

In reality Germany appears to enforce the Dublin rules half-heartedly. Despite most refugees arriving via land through Austria, only a small proportion of asylum decisions reference the Dublin agreement. In the first half of 2017 immigration authorities ruled in only 5.6 percent of cases that a refugee should go back to the first EU country they entered.

3. 2016 was record year for asylum applications

When hundreds of thousands of refugees arrived in the autumn of 2015 they didn't all apply for asylum at once. Because there was already a long backlog with the immigration authorities, many waited until 2016.

That meant that last year smashed the record for asylum requests – 745,545 applications were lodged during the course of the year. 2015 was the second highest number of applications in German history, with 476,649 being made. In the first six months of 2017 the numbers have fallen off sharply to 128,903.

4. Western Germany is a refugee hot-spot North Rhine Westphalia (NRW) is the largest of Germany's 16 states in terms of population. It also has a high immigrant population in comparison with the rest of the country. So its perhaps not surprising that most asylum applications are registered there.

Still, the number of applications outstrips NRW's relative population size. While 21 percent of the country lives in NRW, 27 percent of asylum applications were lodged there in 2016.

The wealthy southern states of Baden-Württemberg and Bavaria are second most popular with asylum seekers – together they received slightly over 20 percent of applications last year.

5. Most applications come from men

Asylum seekers are more likely to be male then female, although the balance changes somewhat from year to year. In 2016 two in every three asylum seekers were male, while so far this year 38 percent have been female.

Interestingly refugees over 55 are more likely to be women, but this age group makes up a very small proportion of overall applications.

6. Babies are now most likely to apply for asylum

Government figures show that two age groups are particularly likely to be asylum seekers in Germany. The first is young people aged between the ages of 18 and 30, of whom the large majority are male. The second group is very young children under the age of four.

Almost one in every four asylum applications lodged this year have been on behalf of children under the age of four. By contrast children aged 4 to 6 made up only 3 percent of all applications.

In 2016 four in ten asylum requests came from youths between the ages of 18 and 30, while 11 percent were made on behalf of babies and toddlers.

7. Afghans are applying in smaller numbers A sign that says “Afghanistan is not safe.” Photo: DPA

At the end of 2016 Berlin began controversial deportations of Afghans back to their homeland. Critics have decried this policy, pointing to the fact that the Taliban still controls large parts of a country where the security situation has deteriorated in recent years.

The policy has also possibly discouraged Afghans from seeking asylum in Germany. Whereas in 2016 some 18 percent of all asylum requests came from the south Asian country, that dropped to 9 percent in the first half of this year.

Syrians made up the largest group of requests in 2016 and in the first half of 2017. Civil war broke out in the Middle Eastern state in 2011 with the estimated death toll of upwards of 321,000 people.

8. Success of applications is going down

So far in 2017 roughly 44 percent of the 444,359 asylum decisions have been in favour of the applicant. But not all of those have been granted full asylum. In fact in all of the cases ruled on in the first half of the year less than a quarter (22 percent) were granted full asylum. Others were given “subsidiary protection” or were left in no man's land with authorities being banned from deporting them.

And applicants' chances of receiving any sort of protection are becoming slimmer. A total of 62 percent of cases were approved in 2016, an approval rate 18 percent higher than so far this year.

Subsidiary protection is controversial because the government ruled in early 2016 that people granted it can't bring their families to Germany. At the same time as this rule changed the number of people being given subsidiary protection sky-rocketed.

Critics have asked why asylum seekers coming from the countries where conditions have not improved are now being given a lesser form of protection.

The immigration authorities often have faced accusations of inefficiency during the refugee influx. Angela Merkel actually sacked the head of BAMF in 2015 and brought in US consultancy firm McKinsey to try and streamline the process.

And the process is speeding up. In 2016 almost 700,000 decisions were made on asylum cases, by far the largest in the history of the Bundesrepublik. But 2017 is on course to beat that record with close to 450,000 decisions made in the first half of the year.

But two years after the refugee crisis hit its zenith, many people are still waiting to hear of their fate.