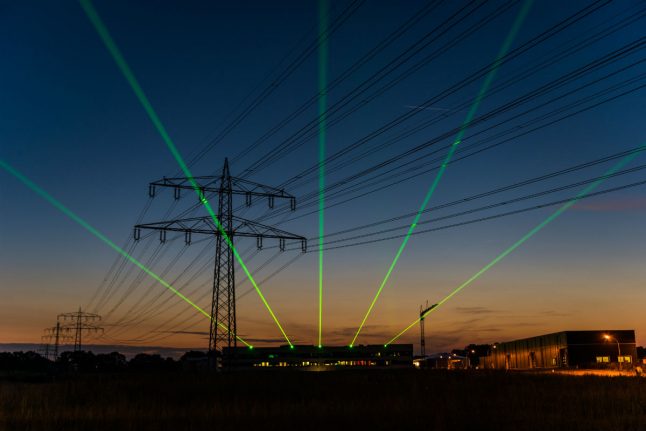 Laser lights shine from the XFEL research centre in the direction of Hamburg. Photo: DPA.

European XFEL will reveal – and capture in images – secrets at the sub-atomic level, promising breakthroughs in medicine, biology, energy, information technology and chemistry.

It will map the molecular architecture of viruses and cells; render three-dimensional nano-scale snapshots; and film chemical reactions as they unfold.

Earth scientists should be able to duplicate and study processes occurring deep inside planets, including our own.

“The laser is the biggest, and the most powerful, source of X-rays ever made,” Olivier Napoly, a member of the French Atomic Energy Commission who helped build the complex, told AFP.

The European X-Ray Free Electron Laser, or XFEL, is lodged in a series of tunnels up to 38 metres underground near the city of Hamburg.

Its centrepiece is the world's longest – 1.7 kilometres – superconducting linear accelerator, designed to provide the energy needed to generate X-ray flashes a billion times brighter than the best conventional
radiation sources.

That's 27,000 X-ray flashes per second, compared to the 120/sec produced by a laser of the same type at the US National Accelerator Laboratory in Stanford, California, and 60/sec generated by another in Japan.

For X-ray lasers, brilliance is measured in the number of photons – sub-atomic light particles with no electric charge that move at the speed of light – generated at a certain radiation wavelength, from high-energy gamma- and X-rays, to low-energy infrared and radio waves.

The uber-laser is “like a camera and a microscope that will make it possible to see more tiny details and processes in the nanoworld than ever before,” Robert Feidenhan'l, chairman of the European XFEL management board, told AFP.

Here's how it works: To generate X-ray flashes, bundles of electrons are first accelerated to high energies near the speed of light.

The electrons – charged with electrical power – then race through an arrangement of magnets that force the particles onto a tight, swerving slalom course.

In the process, each individual electron emits X-ray radiation that becomes more and more amplified.

The electrons gradually gather into a multitude of ultra-thin discs, allowing them to emit their light in sync and produce extremely short, intense X-ray flashes of laser light.

Scientists working in the field of medicine are eager to train these flashes on the tiniest building blocks of living tissue, whether of humans or pathogens.

Like a mechanical machine with moving parts, biological molecules performing their respective tasks change structure. The ultra-short duration of XFEL pulses will create filmlike sequences that can record these changes as never before.

In the field of energy, scientists hope to use the high-powered lasers to improve the efficiency of solar and fuel cells.

The €1.5 billion XFEL is a scaled-up version of a smaller, free-electron laser called FLASH, which has been in use since 2005.

Until 2009, it was the only machine of its kind to produce laser-like, shortwave ultraviolet radiation.

Spearheaded by Deutsches Elektronen-Synchrotron, the Hamburg-based research centre that built FLASH, the European XFEL was born of an international agreement inked in 2009.

Ten European countries and Russia pitched in with cash and/or resources, and Britain has pledged to join the consortium soon.

First developed in 1977, free-electron lasers – meaning that the electrons have been separated from the nucleus of their atoms – produced a high-energy beam of electrons. The one built in Hamburg worked in the X-ray spectrum.

European XFEL is a so-called “fourth generation” laser of this type. The main difference with it's third-generation predecessor is the shift from a circular to a linear accelerator.