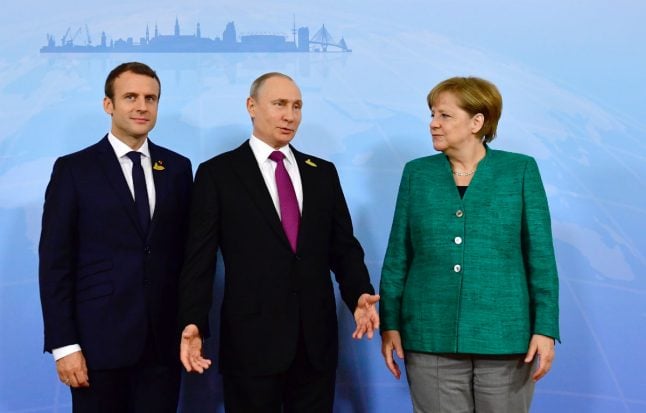 “France and Germany unfortunately have to acknowledge that the security situation in the East of Ukraine has not significantly improved,” French President Emmanuel Macron and German Chancellor Angela Merkel said in a joint statement.

The ceasefire which officially came into force on Friday “has not been fully implemented by the very same parties which signed it”, the two leaders said.

“There is still a large number of cease-fire violations, including with the use of heavy weapons,” the statement added.

“We urge President Putin and President (Petro) Poroshenko to fully abide by their commitments, publicly endorse the ceasefire and ensure that proper instructions have been passed on to the military and forces deployed on the ground.”

The ceasefire between government forces and pro-Russian separatists was intended to come into force before the start of the new school year.

But the Ukrainian side of a joint ceasefire-monitoring centre said the first breach was recorded less than two minutes into the truce, when the separatists shelled the village of Talakivka in the Donetsk region with small
arms and heavy machine guns.

The rebels meanwhile accused government troops of breaking the truce, saying a separatist fighter killed by a Ukrainian sniper's bullet had become the first “victim” of the ceasefire.

More than 10,000 people have been killed in the conflict since 2014, when pro-Russian forces occupied parts of eastern Ukraine and Moscow annexed Crimea.