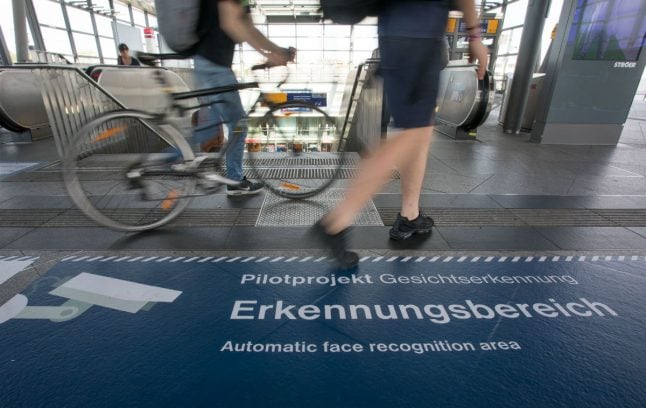 A sticker on the ground at Berlin's Südkreuz train station. Photo: DPA.

Since August 1st, Berlin’s Südkreuz station has been investigating how well surveillance cameras and computers can automatically recognize the faces of passersby. The pilot project was initiated by the federal government in an effort to fight terrorism.

About 300 people voluntarily registered to be part of the test for six months. But the experiment was interrupted on Monday when data protectionists charged that the software was doing more than just testing its ability to recognize peoples’ faces.

“The transponder, which the volunteers at Südkreuz station have to carry with them for additional identification, collects far more data than the federal police reported to them,” said data protection organization Digitalcourage on Monday.

The volunteers are supposed to have so-called iBeacons with them. These are bluetooth sensors with a battery supply which can send their identification number up to 20 metres away and collect further data such as the acceleration, temperature and the inclination of the ground.

Digitalcourage argues that conclusions could be drawn from this information about the volunteers outside of the test area, something they say the participants in the test hadn’t agreed to at any point.

But the Interior Ministry has rejected these accusations.

The technology used could collect more data than would be required for the test, but these possibilities would not be used and were switched off, a Ministry spokeswoman said on Tuesday.

When the project was launched, de Maizière had defended it, saying that the public’s sense of security would be strengthened and arguing that surveillance helps to deter and solve crimes.