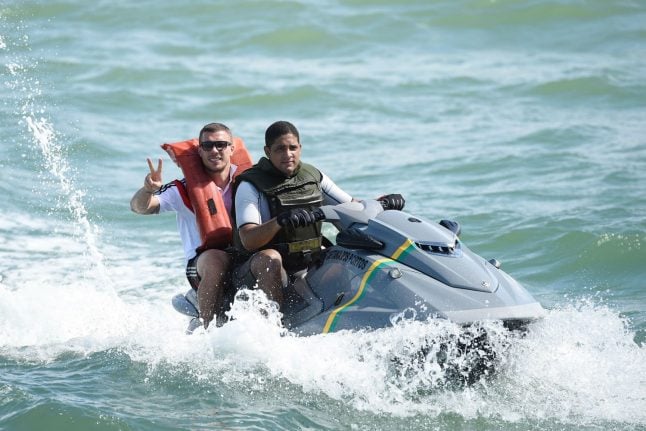 The website originally published an article entitled “Spanish Police Crack Gang Moving Migrants on Jet-Skis” with a picture of the ex-Arsenal star on a jet-ski before it was swiftly changed.

The picture showed Podolski on a jet ski which was taken at the 2014 World Cup in Brazil where the German team were enjoying a day off.

The 32-year-old Podolski, who now plays for Japanese side Vissel Kobe and made his final international appearance in March, has been in touch with his lawyer.

Will somebody tell Steve Bannon and the other geniuses at @BreitbartNews that the guy on the picture is German soccer star Lukas Podolski pic.twitter.com/zWqoQDBg3s

“It's a mess. Lukas distances himself from it and won't let himself be exploited,” Podolski's manager Nassim Touihri told German daily Bild.

“Our lawyer is already involved.”

The wrongly-used picture was shared widely on social media before the website amended the article.

“A previous version of this story included an image of Lukas Podolski on a jet ski,” read an Editor's Note. “This image appeared as an illustration of a person on a jet ski. Breitbart London wishes to apologise to Mr. Podolski.

“There is no evidence Mr. Podolski is either a migrant gang member, nor being human trafficked.