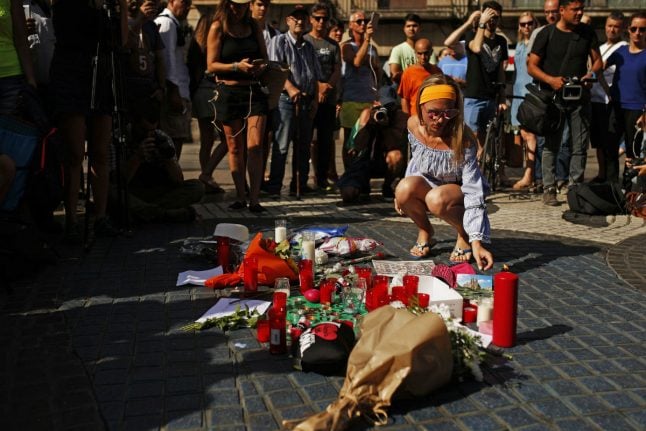 A woman in Barcelona pays her respects after a terror attack in the city on Thursday. Photo: DPA.

The victims will be remembered with a moment of silence, while “loud music and similar” would not be played, said Merkel.

“I wondered if we should still meet here today” after Thursday's attacks that left 13 dead and more than 100 injured, said the German leader on the sidelines of a campaign event in Berlin ahead of a September 24th general election.

But she and leaders of rival political parties finally decided that “yes we will do that”.

“The terrorists will never understand that. But we know that our strength lies in democracy, freedom and respect of each individual,” said Merkel.

“Terrorism can cause times of pain and deep grief as it has done in Spain, but it can never defeat us,” she vowed.

A driver rammed a van into a crowd on Barcelona's famous avenue Las Ramblas on Thursday afternoon, while eight hours later, an Audi A3 car ploughed into pedestrians in the seaside city of Cambrils.

Thirteen Germans were wounded in the assault in Barcelona, some critically, a spokesman for Germany's foreign ministry said, adding that it could not be ruled out that citizens were also among those killed in the attack.

Flags are flying at half mast at all official buildings in Germany.