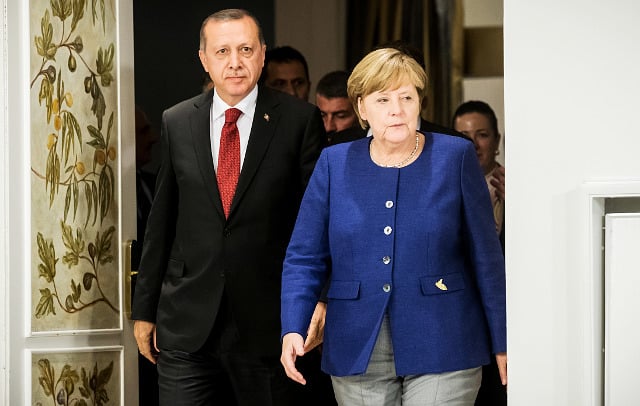 Erdogan and Merkel at the Hotel Atlantic in Hamburg, July 2017. Photo: DPA

Upping the stakes in an intensifying row with Berlin, Erdogan said ethnic Turks in Germany should not cast their ballots either for Merkel's Christian Democratic Union (CDU), the Social Democratic Party (SPD) of Foreign Minister Sigmar Gabriel, or the Greens.

“I tell all my kinsmen in Germany… not to vote for them. Neither the Christian Democrats nor the SPD nor the Greens. They are all enemies of Turkey,” Erdogan told reporters in Istanbul in televised comments.

German Foreign Minister Sigmar Gabriel was quick to hit back at the Turkish leader.

“That is an unprecedented act of interference in the sovereignty of our country,” Gabriel told the RedaktionsNetzwerk media group, adding: “Erdogan's interference in Germany's electoral campaign shows that he wants to incite people in Germany against each other.“

The Turkish president accused the SPD and CDU in the election campaign of playing a game of “the more you beat up Turkey, the more votes you get”.

“You need to support political parties there now which do not display enmity to Turkey. Whether it's the first party or the second party, it does not matter, support them,” he said.

Erdogan did not make clear which German political party he would like people to support in the polls for the Bundestag on September 24th.

“For all our citizens living in Germany this is now a struggle of honour,” he added.

Tensions have spiralled in recent months between Germany and Turkey, in one of the most significant crises in years between two NATO allies with long-standing historical links.

Germany has lambasted Turkey over the magnitude of the crackdown in the wake of last year's failed coup which has seen several German citizens arrested, including journalists.

Ankara meanwhile has accused Berlin of meddling in its internal affairs and seeking to torpedo its longstanding bid to join the EU.

While Gabriel's SPD — whose chancellor candidate is ex-EU parliament speaker Martin Schulz — and Merkel's CDU are rivals in the election they have been in broad agreement on Turkey policy within the coalition.

Meanwhile the opposition Greens have pushed for an even tougher line against Ankara. The Greens' co-leader is Cem Ozdemir, who is of Turkish origin and has been bitterly critical of Erdogan.