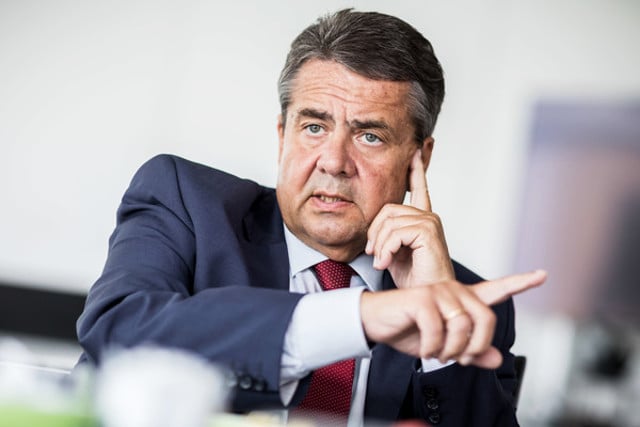 Protester Heather Heyer was killed and 19 people were injured on Saturday when an alleged white nationalist drove into a crowd of counter-demonstrators at a far-right rally in the city in Virginia.

In failing to condemn unequivocally the white nationalist movement the US President was guilty of unacceptable relativism, Gabriel claimed in an interview with the DPA news agency.

“Clearly, equating the two sides rather than distancing himself from the Nazi potential on display there was a huge mistake,” said Gabriel.

“And it’s also wrong,” he added. “And that just goes to show how interwoven a segment of Trump’s supporters are with the radical right-wing movement in the United States. His chief ideologist (Steve) Bannon is close to them.”

In a fractious to-and-fro with reporters at a press conference on Tuesday, Trump blamed both the white nationalists and the counter-demonstrators for the escalation in violence that preceded the fatal car-ramming.

The US President's remarks provoked an angry reaction domestically, with even prominent Republicans including Senator John McCain calling on Trump to condemn the racists behind the rally.

There's no moral equivalency between racists & Americans standing up to defy hate& bigotry. The President of the United States should say so

Sigmar Gabriel, a Social Democrat, drew parallels with discussions that emerged in Germany after the recent violence at the G20 summit in Hamburg.

“We too have seen this kind of equivalency, with political attempts being made to instrumentalize this against the SPD. That’s despite the fact that we have real right-wing terrorism here and no equivalent left-wing terrorism,” said Gabriel.

Prominent politicians from Chancellor Angela Merkel’s CDU and their sister party, the CSU, had accused the SPD of turning a blind eye to violence perpetrated by elements of the left after the major riots that marred the international summit held in Hamburg last month.

Gabriel stressed that he did not want to whitewash the Hamburg riot but added that Germany did not face “the same danger from left and right-wing extremists.”

Six years ago German police uncovered a wave of right-wing terrorist murders that shocked the country. For years the neo-Nazi NSU had avoided detection as they embarked on a killing spree targeting mostly Turkish victims.

More recently, thousands of crimes against refugees were recorded in Germany last year.

The country does also have bitter memories of left-wing terrorism — the Red Army Fraction murdered dozens of high-level representatives of the West German state, mostly in the 1970s.