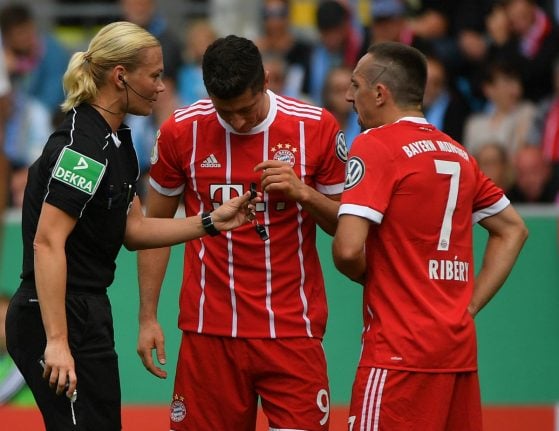 The 38-year-old is on the official list of Bundesliga referees for the 2017/18 season, which starts Friday, meaning she will become the first female ref in the top flight of Germany, England, Spain, France or Italy.

Steinhaus' first Bundesliga match has yet to be announced, but she oversaw Bayern Munich's 5-0 win at minnows Chemnitz last Saturday in the first-round of the German Cup and proved she can handle star players.

She gave Bayern's Franck Ribery a playful punch on the arm after the French winger cheekily untied her boot laces before a free-kick.

“She's strong, she has a lot of power,” said Ribery.

“It was funny, she played along and was in good spirits.

“You can have fun with referees, but it's also important that there's mutual respect.”

Steinhaus says her promotion to the Bundesliga is a “great incentive” and reward for her hard work, but shuns her role as a trailblazer.

“I never planned, and still don't today, to break new grounds of emancipation,” she said at a referee's training camp in July.

“I am only doing what I love.”

Steinhaus has taken charge of around 80 German second division matches since 2011, refereeing the women's final at the London Olympic Games tournament and this year's women's Champions League final.

She has already acted as the fourth official in Germany's top tier and shrugged off Pep Guardiola's attempt to put his arm around her shoulders when the then-Bayern coach remonstrated with her on the touchlines in 2014.

Unfortunately, the 1.81m Steinhaus has already experienced direct sexism on the pitch.

During a second division match in 2015, she sent off Hoffenheim's Germany international Kerem Demirbay, then playing for Fortuna Duesseldorf, who told her women had no place in football.

The remark led to him receiving a five-match ban by the German FA.

Steinhaus, who works with a fitness coach, acknowledges that refereeing in the Bundesliga will challenge her both on and off the pitch.

“I like to say that the Bundesliga is another step up, I have worked intensively and the speed is different,” said Steinhaus.

“Certainly, as a female referee, I will be under special scrutiny from the start of the season, especially from the media. I don't seek public attention and my colleagues know me well enough to know that.”

Steinhaus is a policewoman and in a relationship with English former top ref Howard Webb.

She can expect to have her decisions scrutinised by fans in football-mad Germany.

“In football, which is the favourite child of German men, changes are about as welcome as an annoying bout of diarrhoea,” Neumann told SID, an AFP subsidiary.

A survey by Loughborough University has found only 3.7 percent of senior positions in European football are occupied by women.

Even in women's football, 10 of the 12 teams in Germany's top flight are coached by men.

Nevertheless, Steinhaus is relishing her chance to make history by blowing her whistle in the Bundesliga.

“It has always been my dream and I am delighted that it will come true,” she said.