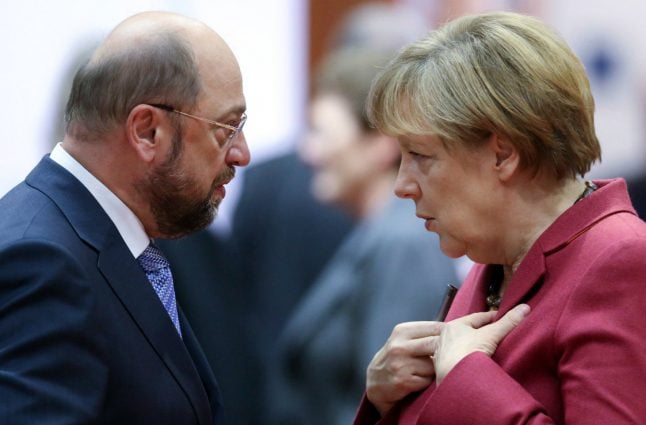 But observers say Merkel and her Social Democratic challenger Martin Schulz will have to tread a fine line between defending diesel owners and bashing a crucial industry that employs 800,000 people and is the backbone of the German economy.

“The 'big bad industry that has to change' will be a constant refrain throughout the campaign,” said Nils Diederich, professor of political science at Berlin's Free University.

“But we will see that all parties will approach the topic very cautiously,” he told AFP.

“Not even the Greens are calling for diesels to be taken off the road right away.”

Merkel, criticised for staying silent in July when the dieselgate scandal widened on allegations of decades-long collusion between automakers, used her first campaign event to slam car executives.

“Large parts of the automobile industry have gambled away incredible trust,” she said on Saturday.

Her main rival, Schulz, used his own media blitz on Sunday to call out the “irresponsible” managers who had failed to make the necessary investments in the cleaner cars of the future.

“Diesel drivers in Germany should not have to foot the bill for their irresponsibility,” the former European Parliament president said.

He called for an EU-wide quota to push electric cars, a proposal dismissed by Merkel as too complicated to implement.

Commentators said the attacks on the car industry carried a whiff of hypocrisy given both parties' notoriously cosy links with Germany's auto giants over the years.

“It won't win them any new supporters because the German public knows about the close interaction between the automobile industry and politicians,” said Carsten Brzeski, chief economist at ING Diba.

The industry's fall from grace began in 2015 when Volkswagen admitted to installing software in 11 million diesel engines to cheat emissions tests, and suspicions later spread to other manufacturers.

The scandal deepened on reports last month that Daimler, BMW, Volkswagen and its Audi and Porsche subsidiaries had colluded on technical specifications including emissions technology, prompting anti-trust probes at home and in Brussels.

The damage done to the 'made in Germany' brand, along with concerns over pollution and plans by some cities to ban dirty diesels, have fuelled public anger.

An early August poll for broadcaster ARD found that 57 percent of respondents said they had lost faith in the vaunted car industry.

Two thirds also said they believed politicians were too close to the sector.

The survey makes for grim reading, particularly as it came just after the government's hastily called “diesel summit”, which was widely panned after carmakers only committed to software updates in some five million cars and trade-in incentives.

A second summit is now planned for the autumn.

Shortly after, German media reported that Merkel's conservative CDU party had received nearly €700,000 in donations from the Quandt family, the largest shareholder in luxury carmaker BMW.

In the state of Lower Saxony, which holds a 20-percent stake in Volkswagen and two seats on its board, recent revelations that SPD premier Stephan Weil allowed VW to vet his comments on dieselgate sparked outrage.

“There will always be close ties with such a key sector,” said Brzeski.

But he predicted that politicians would have to “take on a more guiding role” in their dealings with the sector in future.

Ahead of the September 24th vote, the latest Emnid poll put support for Merkel's conservative block at 38 percent, followed by the SPD at 24 percent.

In Germany's coalition system that means the smaller parties could end up being kingmaker, and help steer the next government's dieselgate response.

The pro-business FDP has already rejected Schulz's quota proposal, while the Greens have welcomed it.

The far-left Die Linke says the main parties aren't going far enough and should force auto bosses to replace the cars that can't be refitted to meet emissions regulations.

The right-wing populist AfD meanwhile has called for an end to the dieselgate “witch hunt”.