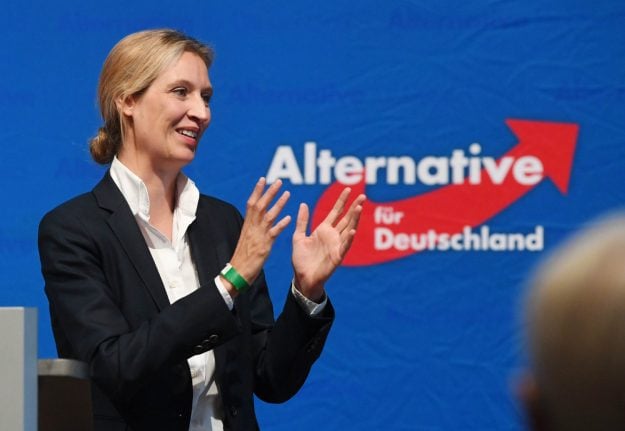 The poll published by INSA and Bild on Tuesday found that the far-right AfD are on course to win 10 percent of the vote at the September 24th vote. That would put them in third place behind the Social Democrats (SPD) on 25 percent and Angela Merkel’s Christian Democrats (CDU) on 37 percent.

The far-right party, who were set up in 2013 and have recently built popularity on their staunch criticism of Merkel’s refugee policies, are only just ahead of the competition, though.

The pro-business Free Democrats (FDP) are set to win 9 percent of the vote, as are Die Linke (The Left Party), INSA predicts. The Green party meanwhile lags behind on 7 percent.

If the AfD were to become the third largest party in the Bundestag it would act as a lightning bolt striking German politics, where conservative votes have been hoovered up by the CDU and their Bavarian sister party the CSU throughout the postwar period.

The AfD have caused public outrage on several occasions, with leaders being accused of anti-Semitism, racism and even Nazi sympathies based on comments they have made in public and private.

But Merkel’s decision to open the country's borders to refugees from Syria and other war-torn countries proved unpopular with many conservative voters. Meanwhile a string of terrorist attacks and mass sexual assaults in Cologne and other cities during New Year 2015/16 soured the public mood towards asylum seekers, providing the AfD with a string of state election successes in 2016.

If the AfD were to win 10 percent of the vote it would complicate coalition building after the election, as all the other parties have ruled out building a coalition with them.

Nonetheless, other polling does not show the AfD scoring so strongly. An Emnid poll published on August 12th put the far-right party on 8 percent, behind Die Linke (10 percent) and level with the FDP.