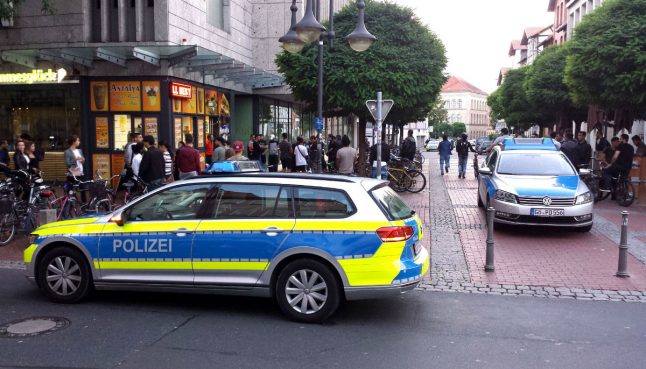 On Monday morning news agency DPA reported on information from police that a mass brawl had broken out between Lebanese and Syrian men in front of a shopping mall in Göttingen. The initial police report claimed that two groups of men totalling around 200 people had attacked each other.

“What we know for certain is that two large groups of people of differing nationalities attacked each other on Sunday night,” police stated.

The story quickly gained national attention, with major national media outlets reporting that a mass brawl took place in the centre of the sleepy university town. Several news outlets referred to the participants as refugees.

But later on Monday police admitted that there had been no mass brawl. They said that while roughly 200 people of differing nationalities were at the scene, they had been called out to deal with a fight which involved five to ten men, according to Sueddeutsche Zeitung. One man who was taken into custody has since been released, and no one sustained any major injuries.

How the altercation came to be called a mass brawl involving 200 people remains unclear, as is the question of why the clash began and who started it.

“The matter is still quite confusing,” stated the police, explaining that a “communication error” had led to them to first claim 200 people had been involved in the fight.

This is not the first time that police have been accused of publishing misleading information concerning criminality involving refugees or ethnic minorities.

In July police reported mass violence at a folk festival in Schorndorf, Baden-Württemberg. The report grabbed national attention, particularly because police said many of the rioters came from “immigrant backgrounds”.

But police later said that just around 100 teens and young adults there were deemed to have “high potential for violence” and that bottles thrown at police officers came from within this smaller crowd. The number of people who had actually been violent remains uncertain.

On the other hand, over New Year 2015/16, police in Cologne were accused of covering up crimes committed by asylum seekers. On that occasion police reported a calm night, even as hundreds of women were sexually assaulted by men described as being North African, while police were overwhelmed by the scale of the violence.

Stories about violence among refugees have become headline news in Germany over recent years, after Chancellor Angela Merkel's liberal asylum policies in 2015 led over 1 million people to arrive in the country as refugees. The far-right claim that the political and media elite have created a culture of silence around crimes committed by immigrants. Left-wingers, meanwhile, argue that conservatives exaggerate migrant crime in order to whip up xenophobia.

Even after police corrected their initial report, far-right critics of Merkel's refugee policy took to Twitter to claim it proved the Chancellor had made a mistake.