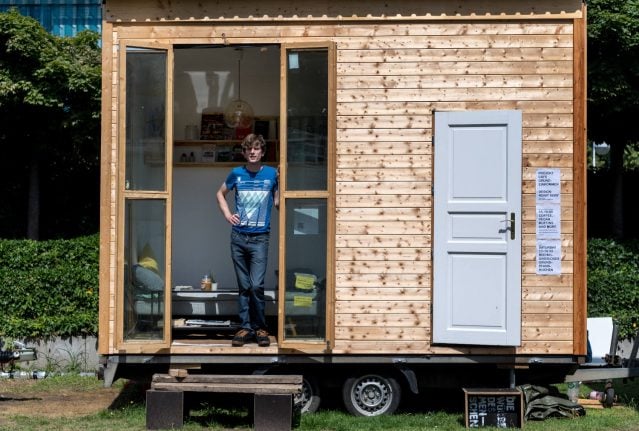 A man inside one of the tiny houses in Berlin. Photo: DPA

“I fetched my drill and collected some wood that I found randomly in the streets and brought it to the line where people were standing there bored to death and we just started building,” the architect told AFP.

The end products were pint-sized playhouses that children could crawl into for shelter as well as break up the monotony of the endless wait.

It also marked the birth of the so-called Tiny House University, a project bringing together architects, designers and refugees to experiment with innovative ways to house a population in need.

“We are trying to create new kinds of housing forms in society in which it's possible to live and survive without having land or money,” said Le-Mentzel.

The tiny house trend emerged several years ago, largely in the United States as people chose to downsize their living space out of environmental or financial concerns.

In Berlin, it has been given a twist for contemporary needs.

For a start, Le-Mentzel's team which includes six refugees, is collaborating with the Bauhaus Archiv to build 20 tiny houses occupying 10 square metres (100 square feet) each.

Together, the houses will form a temporary village on exhibition until March 2018.

Some will serve as lodging, while others are destined to be a library, cafe, workshop or community centre.

Each building is fitted on wheels – which Le-Mentzel said means they can be parked on public streets as a form of trailer.

“In Berlin we have 1.5 million cars registered and they are all standing in the streets overnight, not in use. Each car is about 10 square metres,” noted Le-Mentzel.

“So I'm asking what would happen if we just replace these 1.5 million cars with tiny houses or with mobile playgrounds for kids or with open spaces where neighbours can cook together, eat together, find company together, where refugees can create a start-up in the streets – opening a restaurant, (giving) a haircut.”

Like metropolitan cities worldwide, property prices in Berlin have shot up as the city shed its Cold War divided past to become a tourism and party hotspot, as well as an investment magnet.

Although new builds are mushrooming across the capital, refugees and low-income locals are finding themselves priced out.

Le-Mentzel views his Tiny100 as a prototype for small apartments which can be let out for €100 ($117) a month to low earners.

His ultimate goal is to fit out a building not only with regular-sized apartments, but also such compact homes, allowing the “rich and poor, students and entrepreneurs” to live together.

“It will be a house that mirrors society,” he said, adding that talks are ongoing with “three or four investors” about making his dream come true.

“But we are at the beginning of the process.”

Ali Fadi, a Kurdish refugee from Syria, has not thought that far to having his own tiny apartment.

The 33-year-old is simply revelling at being able to practise his trade.

Fadi is an experienced carpenter, but had found himself shut out of the German job market because he lacked the paper qualifications.

Measuring a piece of wood before sawing it off for the tiny house that would house a cafe, Fadi said he hopes that his work in the project would help overcome the bureaucratic barrier.

“I hope I can get a job doing this,” said Fadi.

Party for 13 in 6 square metres

Left: The tiny houses in Berlin. Right: Noam Goldstein inside one of the houses. Photos: DPA.

At a warehouse area in southern Berlin, another member of the team, Noam Goldstein, is fitting insulation into one of the 20 tiny houses.

His version of the small home would feature not just the usual trappings of an apartment, but also include solar panels, a compost toilet and a hydroponics garden.

While some components like windows have to be purchased, Goldstein said much of the wood used is recycled pallet wood.

“When you look at the financial aspect, it provides a very cheap way for people to build their own house,” said Goldstein.

Researcher Amelie Salameh, who was among the initial ones to try out the first of the 20 tiny houses overnight, is a convert.

Measuring just six square metres, the first tiny house built by Le-Mentzel himself for the project is a self-contained unit with a living room, kitchen, sleeping area, toilet and shower.

“The way it was designed, there were mirrors, a lot of light, I never felt trapped inside,” said Salameh, who lived in the house called Tiny100 for three weeks.

She even had two friends sleep over for a night, and once also hosted a visit of 13 people.

“We had a few beers, it was fun,” she said, adding that “you just have to think about where you're putting your stuff, and to tidy up constantly, because the place gets full quickly.”