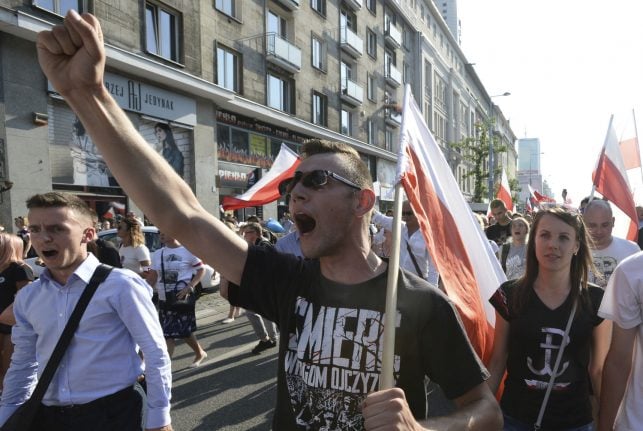 A right-wing demonstration on Tuesday marking the 73rd anniversary of the 1944 Warsaw Uprising. Photo: AP/DPA.

More than 72 years after the end of the Second World War, Polish politicians are demanding that Germany pay their country reparations. A research office of the Sejm – Poland’s lower house of parliament – is now reviewing whether this would be possible.

The analysis should be complete by August 11th, Sejm representative Arkadiusz Mularczyk of the leading Law and Justice party (PiS) told news agency PAP on Wednesday.

The review comes after comments made by the powerful head of the PiS, Jaroslaw Kaczynski, who last week accused Germany of “rejecting” its Second World War responsibilities, going as far as to suggest Berlin should pay reparations.

“We are talking about huge sums and also the fact that the Germans have for years rejected their responsibility for the Second World War,” Kaczynski told Catholic radio station Radio Maryja.

Kaczynski's brother and former President Lech Kaczynski – who died in 2010 – had estimated when he was mayor of Warsaw that the had cost the capital city alone $45.3 billion.

In August 1953, Poland’s former communist government was under pressure from the Soviet Union when it decided not to take further compensation from Germany as a way to help solve “the German question in the spirit of democracy and peace.” The Second World War had begun with the Nazis’ invasion of Poland and the war ultimately cost around six million Polish citizens their lives.

“It is not genuine that Poland renounced reparations that were due to us from Germany,” said Defense Minister Antoni Macierewicz to Polish news channel TVP Info.

German government spokeswoman Ulrike Demmer said that Germany “stands by its responsibility in the Second World War, politically, morally and financially.” But she added that the question of reparations had already been legally and politically resolved.

Macierewicz argues that the former communist government had been used as a puppet for the Soviet Union at the time of its decision.

Relations between Berlin and Warsaw have been on edge recently over issues including Germany’s push to share responsibility for refugees across Europe – which Poland has rejected – to the European Commission’s infringement procedure against PiS plans to have more control over the judiciary.