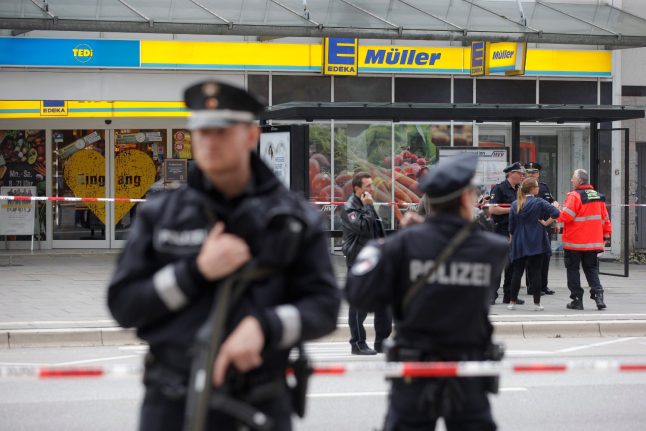 Police outside the scene of the crime in Hamburg. Photo: DPA.

The Palestinian suspect, named as Ahmad A., had entered a supermarket on a lively Hamburg high street on Friday, snatching from the shelves a 20 centimetre knife, which he used to slash at people around him, leaving one dead and injuring seven others.

According to Spiegel information published on Tuesday, Ahmad A. could have been deported to Norway in the spring of 2015 because he had unsuccessfully applied for asylum in the Scandinavian country before coming to Germany. Under the so-called Dublin regulations which apply to Norway as well as EU countries, he could have been sent back to the country where he first applied for asylum.

The Germany Federal Office for Migration and Refugees (BAMF) in May 2015 took Ahmad A.’s fingerprints and found that they matched prints in Norway. By the time BAMF workers got around to requesting that Norway take him back, they had missed the deadline to do so – by just one day, BAMF told Spiegel.

Norwegian authorities then refused to take him in and thus Germany became responsible for him.

As all of this was happening amid the high point of the refugee influx in mid-2015 and BAMF officials were overwhelmed by thousands, he was not rejected for asylum in Germany until November 2016 – a year and a half after he arrived in the country.

He again could have been deported after not obtaining asylum, but this effort failed because he had no passport and the Palestinian mission in Germany did not issue any substitute documentation for him, according to Hamburg officials.

Still, according to Spiegel he initially seemed to be willing to leave for Palestine before Friday’s attack.

Prosecutors said on Monday that there appeared to be a “radical Islamist background” to the knife attack.

“On the day of the act, he resolved to commit an attack with the hope that he would die as a martyr,” added prosecutors.

Investigators have however not found any indications suggesting that he was a member of jihadist groups like Isis.