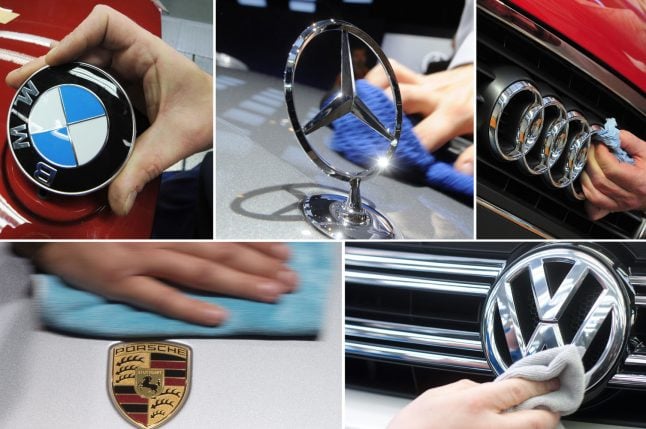 These brands are under fire for reports that they colluded to fix prices. Photo: DPA.

The suits filed almost simultaneously in US and Canadian courts come as European authorities investigate the German carmakers cartel which allegedly struck unlawful bargains to share technology and strategy.

According to one news report, US authorities also are reviewing the allegations.

The residents of Florida, New Jersey and the District of Columbia, said the companies illegally shared information on costs, suppliers, markets, emissions equipment and other competitive matters.

That collusion harmed buyers because “they paid more for German luxury vehicles than they otherwise would have,” said the plaintiffs, who claimed to represent an entire class of American buyers.

The US lawsuit seeks “treble damages” at trial, although the amount was not specified.

The suit filed in Montreal made similar allegations and seeks $878 million (CAN $1.1 billion) in damages.

“If the allegations in the claim prove to be true, then Canadian consumers have been harmed by a long-standing cartel of German car manufacturers to provide inferior components in their vehicles while charging premium prices for these vehicles,” attorney David Wingfield said in a statement.

Daimler dismissed the allegations in the lawsuits.

“We consider these class action suits to lack merit,” a spokesperson told AFP in an email. “We will defend ourselves by all legal means.”

BMW declined to comment on active litigation, as did Volkswagen.

Germany's all-important auto industry has been under a cloud since the weekly Der Spiegel reported on Friday on documents it said showed carmakers had held secret meetings since the 1990s.

The latest controversy brings renewed negative scrutiny to Volkswagen, which has struggled since 2015 to put its global emissions cheating scandal behind it.

The company so far has set aside more than $24 billion to cover related fines and compensation and a former executive charged with covering up the scandal agreed on Tuesday to plead guilty to fraud and conspiracy charges.