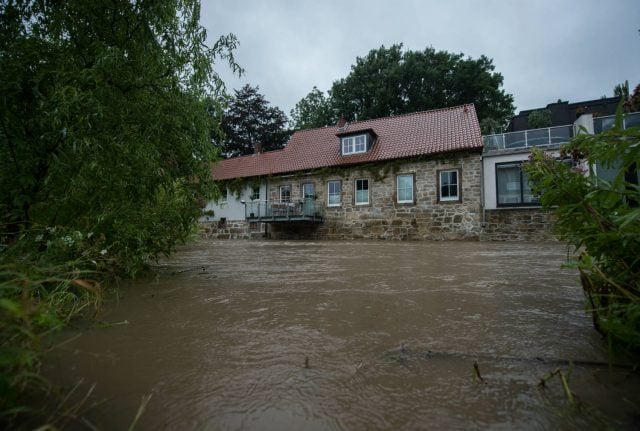 A 69-year-old woman in Wernigerode, Saxony-Anhalt has disappeared amid heavy rains near a river by her home, police reported on Wednesday. Authorities said it could be possible that she fell into the river on Tuesday, as the water level there has greatly increased.

The district of Goslar in the Harz mountain region of Lower Saxony also on Wednesday officially sounded the disaster alert due to flooding caused by rainstorms in the area.

In the small town of Bad Harzburg, the train station has been blocked off due to the tracks being underwater. The water level on many streets there also reached at least 20 centimetres high. Around 350 firefighters have been working there, and police are calling for more backup.

In the city of Goslar, serious flooding in the streets – as pictured below – has also largely blocked off the city centre, and a hotel as well as a senior centre have been evacuated.

According to the German Weather Service (DWD), the amount of rain so far this week in the Harz area has in some places reached or even surpassed the level of precipitation typical for the whole month of July.

Meanwhile on the Baltic Sea island of Rügen, two vacationers sustained life-threatening injuries in a car accident, which police suspect was caused by the heavy rain.

Fire crews in Hildesheim, Lower Saxony, have said that they are preparing for the worst case scenario of evacuating areas of the town, as water levels continue to rise in the rain.

“At the moment our barricades are holding. But we are prepared for everything, including an evacuation,” a spokesman for the fire services said on Wednesday morning.

With a whole residential area of town under threat from the rising river level, 1,100 people could be told to leave their homes.

“The doors of an emergency shelter are already open,” a spokesman for the city authorities said.

Thirteen people have so far moved into the emergency accommodation, where they have been given basic provisions.

More than 200 fire crew members worked through the night on Tuesday to try to secure the town against flooding.

“We are building up sandbags and we'll keep an eye on whether they withstand the pressure,” said the fire services spokesman.

Water has been seen seeping through the sandbag barrier, but only in green areas along the Innerste, a tributary river to the town's main river, the Leine.

“The Innerste reached a record level last night,” a city spokesman confirmed on Wednesday, adding that the level beat a previous record set in 2007.

Flooding has hit several other regions of Lower Saxony over the past two days, including Holzminden and Hameln-Pyrmont. But by Wednesday morning the rain had let up.

Fire crews were also building up sandbags to secure residents of Göllingen, Thuringia, on Wednesday, as the Wipper River swelled to dangerous levels.

DWD has predicted more rain for Lower Saxony and Thuringia throughout Wednesday and has issued a weather warning for large parts of the east of the country.

Rainstorms set to subside, but not end

DWD said on Wednesday that the low pressure area dubbed Alfred that has been pouring down on Germany this week will move further east, and thus bring some relief to at least the western and central parts of the country.

But that doesn’t mean the wet weather is over. Regions including northeast Brandenburg, eastern Saxony and southeast Bavaria can still expect long-lasting and forceful rainfall on Thursday. The west and southwest will have some lighter showers, with sunshine peeking through here and there.

Saturday is expected to be more sunny and warm in the west and south, with highs up between 25C and 27C, while the northeast still faces the prospect of more rain. By Sunday the west should also get its share of more storm clouds along with the east, while the south will get sunshine during the day before storms are predicted to come back by the evening.