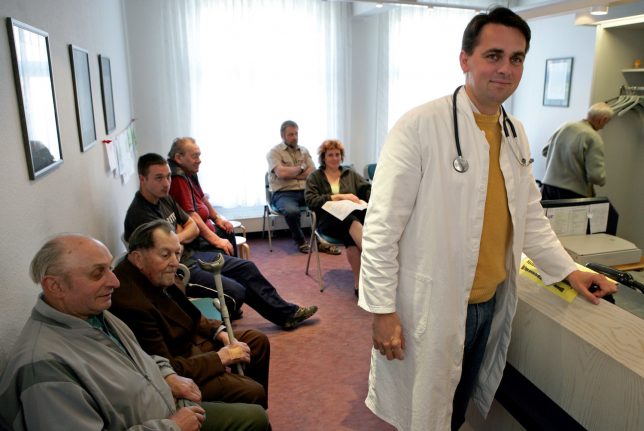 File photo of a doctor's practice in Brandenburg. Photo: DPA.

The growing number of immigrants, in particular from other EU countries, has improved the financial system of Germany’s public health insurance scheme as well as its pension funds, according to reports on Wednesday by business newspaper Handelsblatt and Focus magazine.

Data from the German Statutory Pension Insurance Scheme shows that pension fund and health insurance contributions are stable in the country thanks to the increased number of immigrants, Handelsblatt reports.

The number of non-Germans paying into social security systems increased by 53 percent – or 1.7 million people – between 2008 and 2015. And the number of contributors from other European Union countries alone doubled, reaching two million.

The head of the National Association of Statutory Health Insurance Funds (GKV), Doris Pfeiffer, explained that recent healthcare reforms were expected to make things more expensive, but in fact the contributions people pay into the statutory system hardly increased at all. Pfeiffer attributed this to the young, healthy and highly-qualified newcomers, coming in particular from EU countries.

Focus magazine, which also saw the GKV figures, reported that revenue from each insured person has increased recently more than it has in years, with 2017 expected to bring in a surplus of at least €1.5 billion.

“The GKV is currently profiting from a significant increase in immigrants and consequently also an additional number of contributors,” Pfeiffer told Focus, adding that in addition to working European professionals, these new contributors also include people with asylum status.

SEE ALSO: Everything you need to know about the German healthcare system

This coupled with a good economy means that the GKV has “stable finances”, Pfeiffer noted.

Because many of the new contributors are young, they are rarely sick, which means they require fewer expenditures for themselves.

“These newly insured people need significantly fewer services, which relieves the expenses side of things,” she added.

Another result of the relatively young ages of the immigrants paying into the pension system is that they have many more years until retirement, and therefore more time to feed money into the system, Focus reports.

“I would really like this to be moved to the forefront of the current debate on refugees and immigration.”

Centre-left SPD party health expert Hilde Mattheis emphasized that the figures also demonstrate that immigration not only enriches Germany culturally, “but also very concretely through the strengthening of our social security systems”.

“The AfD and other populists should take note of this evidence when they again want to agitate against refugees and immigrants in Germany,” Mattheis said.

The most recent government figures on immigration showed that the year 2015 had a record number of immigrants entering the country, reaching 2.14 million people. That was a jump of about 46 percent compared to 2014, and 45 percent of immigrants came from an EU country.

But the number of people leaving the country also hit a record high of about one million people, the vast majority of whom were not German.

Syrians made up the largest group of immigrants at 15.3 percent of the total, followed by Romanians (10 percent) and Polish immigrants (9.2 percent).

Germany's population at the end of 2016 was also the largest it had ever been, at about 82.8 million people. Experts note that without immigration, the population would probably have shrunk given that deaths have been outpacing the birth rate for years.

SEE ALSO: Germany's population is at a record high – so what does this mean?