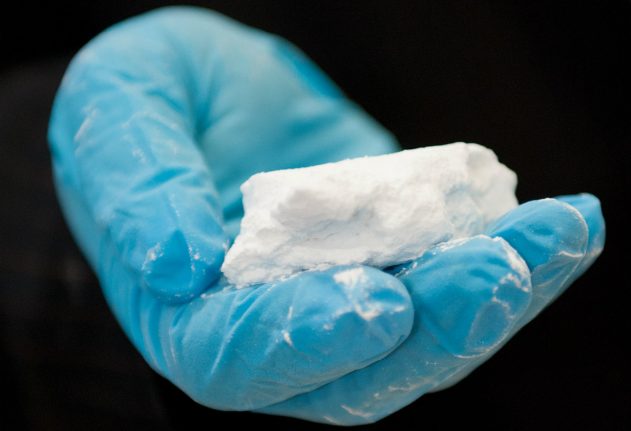 1. Drug deaths are on the rise

Critics say that the rise in drug deaths has been due to the fact that police resources have been diverted towards the refugee crisis, a claim which the government says can’t be substantiated. 2. But the medium-term trend is still downwards

The good news is that drug deaths in 2016 were a lot lower than they were at the turn of the century. In fact, between the years 2000 and 2012, the number of people who died annually due to drug consumption more than halved, from 2,030 down to 944.

3. Drug use has become more widespread over recent decades

Up until the early 1970s, drugs were controlled in Germany via the Opium Law, a little used piece of legislation dating back to 1929. The government responded to the increased prevalence of drugs in the late 1960s by introducing the Federal Narcotics Act (1971).

Drug use has become increasingly widespread ever since. Surveys show that the younger a German is, the more likely they are to have tried an illegal drug at least once in their life.

Sixteen percent of those aged between 18 and 20 have experience with hard drugs, whereas no more than three percent of those over 40 have at some point tried a hard drug, according to the Federal Centre for Health Education.

Official figures from 2016 show that some 600,000 Germans currently have a “problematic relationship” with cannabis and other illegal drugs. Figuring out how much money Germany puts into drug policies is not easy, surmises the European Monitoring Centre for Drugs and Drug Addiction in its 2017 report. And that is because Germany does not distinguish between money spent on countering the use of legal drugs like alcohol and tobacco, and illegal drugs.

But a 2006 study estimated that Germany spends between €5.2 billion and €6.1 billion annually on measures related to drugs, including public order issues and health costs.

Whether it be cannabis use or hard drugs, males are much more likely to turn up in official figures than females.

A government survey from 2016 found that 20.6 percent of men between the ages of 18 and 25 admitted to having smoked cannabis over the previous 12 months, whereas only 9.7 percent of women in the same age range said the same. At the same time, 84 percent of all drug deaths in 2015 were male.

6. Moving away from strict prohibition

In recent years, steps have been taken to put more emphasis on support and education for drug users. In 2012, the Bundestag (German parliament) passed the National Strategy on Drug and Addiction Policy, which based drug policy on prevention, advice, treatment and minimization of harm – signalling a move towards seeing drug addiction as a public health issue.

In recent years, drug consumption centres have opened up in many major German cities. These provide clean needles, plasters and places to wash one’s hands, while staff turn a blind eye to users bringing in drugs. North Rhine-Westphalia has ten such centres, Hamburg has five, and Berlin has two. But they don't exist everywhere – Bavaria doesn’t have any.

The fact that Bavaria, a state not exactly known for its progressive outlook on social policy, doesn’t have any drug consumption areas isn’t connected to a lack of drug users. In 2015, a quarter of all drug deaths (315) happened in the wealthy southern state. Still, the highest number per 100,000 inhabitants was in Berlin.

7. Crystal meth and the Czech border

The number of people caught for the first time with synthetic drugs has risen steadily since 2010. Part of this rise is attributable to an increased prevalence of crystal meth, which is often produced in the Czech Republic and then smuggled into Germany.

This makes the border regions of Saxony and Bavaria particularly vulnerable. But in 2015, police reported that seizures of the drug had spread all the way to Saarland, a small state on the border with France.

8. Cannabis, the illegal drug of choice

Unsurprisingly perhaps, many more Germans have tried cannabis than other illegal drugs. While weed smoking was highest in the 1990s, there has been a revival in recent years, with 2015 seeing a sharp rise in consumption by young men.

The number of people seeking treatment for their use of the drug has also soared in recent years. In 2006 some 6,000 cannabis users made their first visit to a drug treatment centre – by 2015 that number had risen to almost 16,000.

Cannabis that is sold in Germany is normally grown in Morocco before being smuggled over to Spain by cargo ship and then travelling by truck to the Bundesrepublik. The Federal Narcotics Act technically allows for a jail sentence of up to five years for the possession of a controlled substance. But judges are encouraged to follow the principle “treatment instead of punishment.” And if a jail sentence is ordered, it can be delayed or diminished if the convict proves willing to seek treatment.

If you are caught with small quantities of cannabis or cocaine which are considered to be for personal use in Germany, German prosecutors have the option of dropping charges against you. Specifically, that generally means possession of cannabis with less than 7.5 grams of THC, and possession of less than 5 grams of cocaine.

Producing or trading in narcotics can be punished with a prison sentence of up to five years, or 15 years in “aggravated circumstances.”

There has been some movement towards decriminalization of weed in recent years. A law passed in 2017 allows for medical marijuana to be prescribed for seriously ill patients, such as those suffering from multiple sclerosis, chronic pain, serious appetite loss or nausea from chemotherapy. But there is no proposal as yet to fully legalize cannabis.

Critics of the government policy emphasize treatment over punishment.

Dr. Heino Stöver of the Frankfurt University of Applied Sciences, say that the government should legalize possession of all banned drugs, claiming that Germany is “fighting a symbolic war that it has already lost.”

“The decriminalization of the consumption of all drugs is a long needed first step” towards a more effective drug policy, Stöver told Die Zeit in 2014.