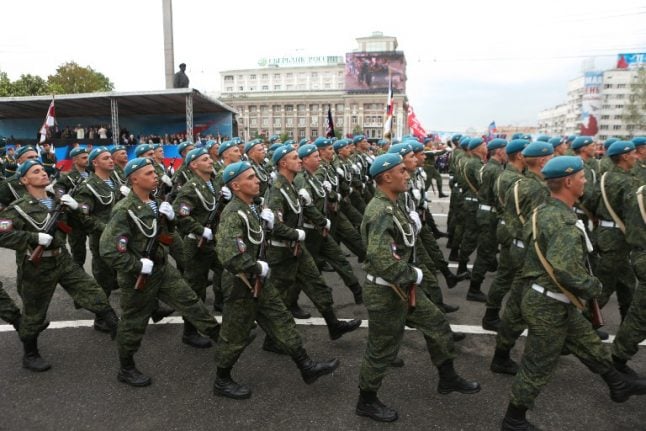 Pro-Russian rebels march in the center of Donetsk during the WW2I Victory Day parade in May. PHOTO: ALEKSEY FILIPPOV / AFP
Washington also announced on Friday that its new special envoy for negotiations to end the more than three years of fighting, Kurt Volker, will travel to Ukraine and Europe for talks.
The flurry of diplomatic activity follows a fresh clashes in eastern Ukraine which has claimed the lives of 11 Ukrainian troops over the past few days, the most serious surge in bloodshed in recent months.
The diplomatic phone talks on Ukraine are also the first since French President Emmanuel Macron took office.
“I will demand the immediate and genuine provision of a ceasefire along the entire frontline,” Ukrainian President Petro Poroshenko said on Friday.
The Kremlin also confirmed the talks were scheduled.
Meanwhile the US State Department said in a statement on Friday that Volker would travel to Ukraine on Friday “to meet with those who have been affected by Russian aggression”.
Volker, a former ambassador to Nato, will also visit France, Belgium, Austria and Britain in the coming days to discuss the Ukraine crisis.
On Monday he is to hold talks in Kiev on “the path to restoring Ukraine's sovereignty and territorial integrity,” the State Department said.
In Brussels he is set to hold talks with both EU and Nato officials “on resolving the conflict in Ukraine”.
The violence in eastern Ukraine flared several days after a top rebel leader announced a plan to form a new “state” that Kiev warned could put a long-stalled peace plan further in jeopardy.
Donetsk rebel chief Alexander Zakharchenko on Tuesday announced plans to create a new “state” to replace Ukraine. The proposed country was to be called Malorossiya (Little Russia) — a tsarist-era term for an area covering much of modern day Ukraine — and have its capital in Donetsk.
The plan appears to be dead in the water after other rebel bosses rejected it and the insurgents' backers in the Kremlin dubbed it a “private initiative.” However, it sparked fears it could drive another nail into the coffin of a
stalled peace process that has failed to end a conflict that has claimed 10,000 lives.
A deal brokered by the leaders of Ukraine, Russia, France and Germany in the Belarusian capital Minsk in 2015 has hit a wall but is still viewed by those involved as the only way of unwinding Ukraine's war.
Kiev and Western nations accuse Russia of supporting the Ukraine rebels financially and militarily, charges which Moscow denies.