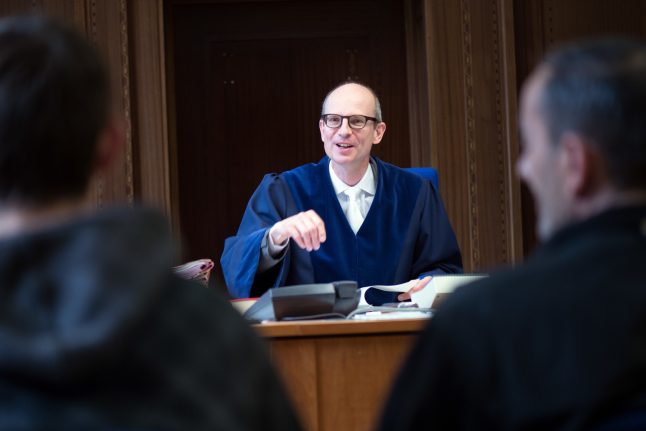 Two asylum seekers in a Düsseldorf court over their application decisions. Photo: DPA.

The chair of the Association of German Administrative Law Judges told publishing group Redaktionsnetzwerk Deutschland (RND) that the number of people bringing legal challenges against their asylum request decisions has overwhelmed the administrative courts.

“The situation is dramatic for administrative courts.” said the organization’s chair, Robert Seegmüller.

“We are now completely stretched to our limits.”

RND further calculated based on national and European data that there are currently around 250,000 asylum decisions waiting to be challenged in the courts.

“The administrative court system cannot endure such a figure in the long run. At some point, everything will collapse,” Seegmüller said. “Things may go well for a while, but not permanently.”

He explained that there are not enough judges or other personnel, nor enough space or IT capacity.

“The justice system is indeed determined to bulk itself up, but it is ever more difficult to find the desperately needed personnel,” he said.

Seegmüller has been voicing his concerns since this past spring, blaming the situation in part on the sheer number of cases that immigration officials have had to sort through as around one million people have arrived in the country seeking asylum over the last two years.

But he also blamed the quality of the decisions made by immigration authorities.

Some refugee advocates, for example, have criticized decisions to reject or even deport Afghani asylum seekers back to a country that they argue is not safe. But Seegmüller did not go into further detail on his criticisms.

Immigration officials themselves have faced a backlog in processing cases, including after it was discovered earlier this year that a German soldier reportedly plotting a far-right attack had managed to obtain protected status under a fake Syrian identity. The discovery prompted an early review this summer of up to 100,000 asylum decisions, which the Interior Ministry said could lead to delays in overall processing times.