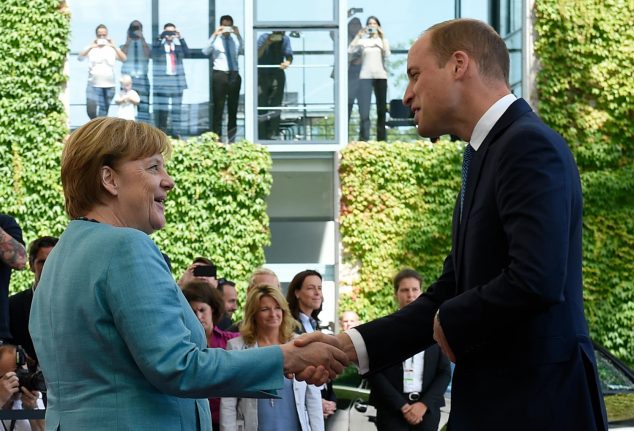 William, who is second in line to the British throne, and Kate touched down in Berlin from Poland accompanied by their young children George and Charlotte.

The first stop for the Duke and Duchess of Cambridge will be a luncheon at the giant modern office complex of Chancellor Angela Merkel, widely considered the European Union's most powerful leader.

German media said the long-planned visit was auspiciously timed as the negotiations on Britain leaving the EU get under way in fits and starts.

National broadsheet Sueddeutsche Zeitung called the young family “Her Majesty's Secret Weapon” and the German tour a “diplomatic mission” with the enthusiastic backing of the Foreign Office.

“They know better than anyone else on the island that the image of the United Kingdom on the continent is not the best at the moment,” it said.

“What could you do in this situation to indicate to your neighbours that Britain is of course a stable nation? Obviously, you send in the royals.”

“The royals represent a kind of common sense that this hard ideological government of the Tories seems to have completely lost at the moment,” its commentator Thomas Huetlin said.

Conservative daily Die Welt called the royal visit to Germany “a kind of rescue mission” a year after the fateful Brexit referendum which stunned the remaining 27 EU member states.

“William and Kate are in Germany with their children to lighten the mood,” it wrote.

While in Berlin, William and Kate will greet the public at Brandenburg Gate, the landmark symbol of German unity, and view the sprawling Holocaust Memorial in the heart of the capital before meeting President Frank-Walter Steinmeier at his urban palace.

The couple will on Thursday move on to Heidelberg in the west, Cambridge's twin city, where they will take part in a rowing competition.

They return to Berlin late Thursday for a party at a century-old dance hall to meet Berliners working in “creative industries” before completing their European tour on Friday in the port city of Hamburg at the spectacular new Elbphilharmonie concert hall.