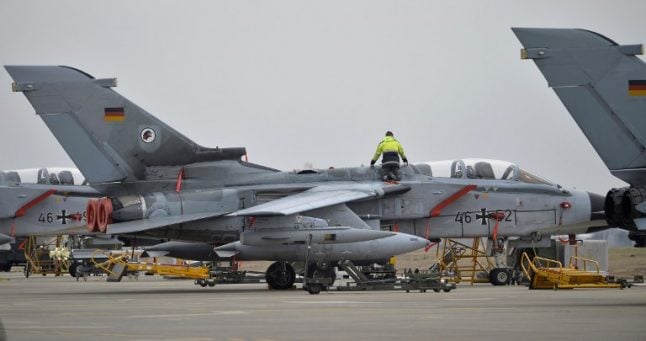 A technician works on a German Tornado jet at the air base in Incirlik, Turkey, last year. Photo: TOBIAS SCHWARZ / POOL / AFP
Turkey asked the legislators to postpone a scheduled visit next Monday to a Nato base in Konya, the German foreign ministry said, adding that it regretted the decision.
The dispute comes after Germany last month pulled out 260 troops from Turkey's Incirlik base, from where a multinational coalition is fighting the Islamic State jihadist group, and redeployed them and their Tornado surveillance jets to Jordan.
Some 20-30 German troops have remained at Konya as part of an Airborne Warning and Control System (AWACs) mission, part of the coalition's campaign against IS in neighbouring Syria and Iraq.
The German foreign ministry insisted that all sides, including Nato, remained in talks on setting a new date for a visit.
Lawmaker Wolfgang Hellmich, head of the parliamentary defence committee, said Turkey's latest move amounted to another denial of the right to visit German troops, and that Ankara had referred to the “strained bilateral relations”.
Hellmich added that he saw no chance now of parliament renewing the mandate for the smaller contingent later this year.
Relations between Turkey and Germany, home to millions of ethnic Turks, have been badly strained, especially since the failed coup attempt almost one year ago against Turkish President Recep Tayyip Erdogan.
Berlin has voiced deep concerns over mass arrests and sackings of alleged coup plotters since, and a host of other civil rights controversies.
One dispute centres on Deniz Yucel, a German-Turkish journalist with the newspaper Die Welt who was imprisoned by Turkey on terror charges earlier this year.
Erdogan has been angered by Germany's refusal to let him and his ministers campaign in Germany, charging last week that Germany was “committing political suicide”.
He has also accused Germany of failing to aggressively pursue Kurdish militants or alleged coup plotters.
Merkel and Erdogan last week met on the sidelines of a G20 summit in Hamburg, but Merkel conceded afterwards that “deep differences” remained.