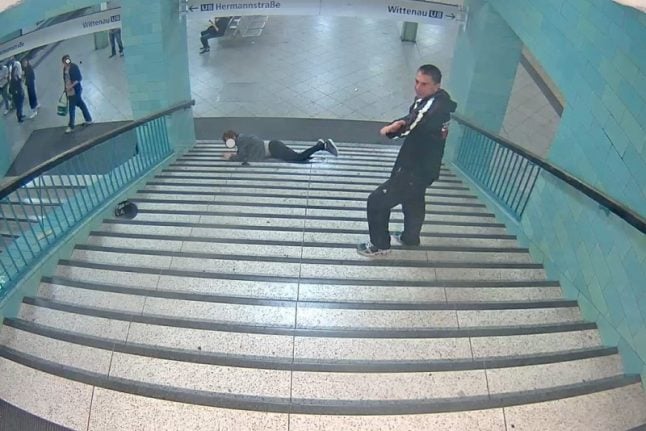 Just days after releasing security camera images showing the perpetrator’s face, police confirmed on Thursday that they had arrested a suspect.

According to a report by tabloid B.Z., the man was brought to a closed psychiatric clinic.

The photos released by police on Tuesday showed the 38-year-old victim falling down the stairs of Alexanderplatz station on June 11th. According to police, the perpetrator had hit him in the back of the head so hard that he fell. The victim suffered a serious head injury as a result of the fall, during which his head hit the metal handrailing multiple times.

He also sustained numerous bruises all over his body.

Within a day of publishing the photos, police received around 40 tips.

Police this week also released photos of two suspects who reportedly kicked one man down an U-Bahn station escalator, also kicked a second man and choked a third man.

The two U-Bahn station assault reports come roughly a week after the so-called “U-Bahn kicker” was sentenced to nearly three years in prison for kicking an unsuspecting woman down the stairs. The security footage of the crime released by police shocked those inside and outside of Germany. 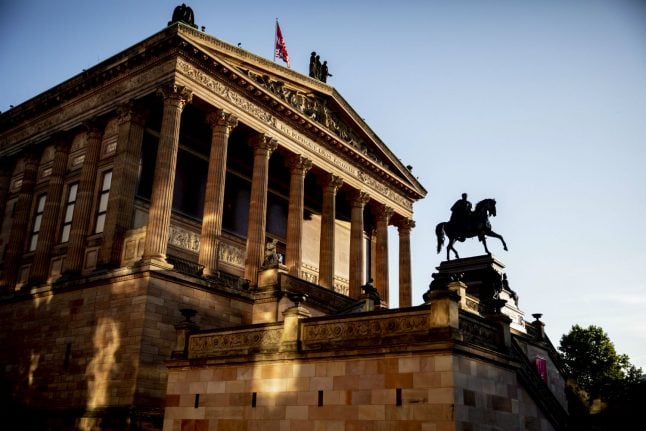 The sun sets on the Alte Nationalgalerie in July. Photo: DPA

The damage had already occurred on October 3rd, or the Day of German Reunification, according to media reports in Zeit and Deutschland Rundfunk.

Around 70 objects in the Neues Museum, Pergamon Museum and Alte Nationalgalerie, among other locations, were sprayed with an oily liquid.

According to Die Zeit, this is “one of the most extensive attacks on works of art and antiquities in the history of post-war Germany”.

Among them are Egyptian sarcophagi, stone sculptures and paintings of the 19th century. The liquid had left visible stains on them.

According to Berlin's Tagesspiegel, visitors who had booked museum tickets for October 3rd were contacted by the State Office of Criminal Investigation (LKA) and urgently asked for help.

“The state criminal investigation office of the Berlin police has opened a probe over property damage to artworks and artifacts on display,” spokesman Martin Dams said in an emailed statement.

He did not say why neither the museums nor the police had communicated earlier about the attack, which was first reported late Tuesday in German media.

Dams did not provide any information about a possible motive.

However a report by Die Zeit and public broadcaster Deutschlandfunk noted that Attila Hildmann, an activist who has railed against government measures to contain the coronavirus, had in August and September spread outlandish conspiracy theories about the Museum Island.

Using his Telegram channel, Hildmann claimed the Pergamon Museum, closed for part of the summer due to the pandemic, held the “throne of Satan”.

He said the institution was the centre of a “global satanist and corona criminal scene” where “they sacrifice humans at night and abuse children”, in an echo of the international QAnon conspiracy movement.

The Museum Island has been a UNESCO World Cultural Heritage Site since 1999. The Pergamon Museum celebrated its 90th birthday at the beginning of October.

The museum is named after its most famous attraction, the Pergamon Altar. It dates from the 2nd century B.C. and was part of the residence of the powerful kings of Pergamon, who created a cultural metropolis in the west of present-day Turkey based on the model of Athens.

Pergamon is one of Germany’s few museums attracts more than one million people every year – when it is not undergoing construction.

The Island’s museums count almost 3.1 million visitors each year. They include the Bode Museum, Neues Museum with the famous Egyptian pharaoh bust of Nefertiti, and the James Simon Gallery – the most recent construction located between two arms of the Spree. 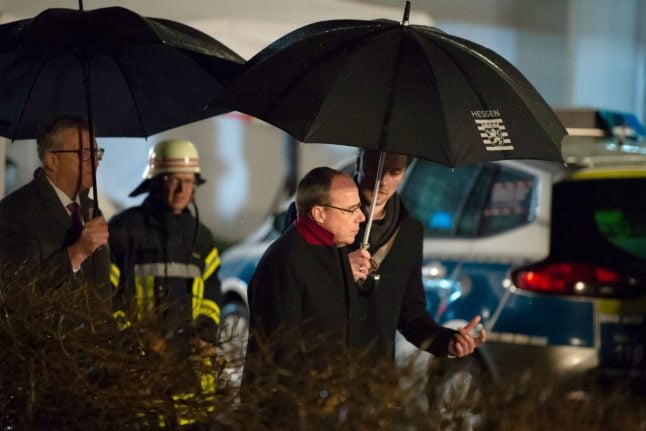