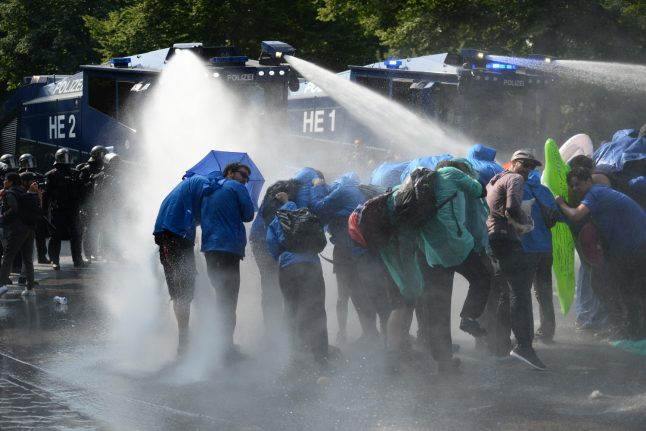 A spokesman from Hamburg’s interior ministry confirmed to Die Welt and other German media on Friday that 35 investigations are currently reviewing police actions taken amid large protests and violent riots in Hamburg last week as the city hosted the G20 summit of world leaders.

Of the 35 investigations, 27 were cases involving accusations of assault by officers, spokesman Christoph Lührs said.

Most investigations were initiated by third parties filing criminal complaints. But seven of the cases were launched internally by Hamburg authorities themselves, four of which allege assault.

Two anti-G20 protesters have also filed lawsuits against police measures, one of whom is contesting being taken into custody at a pre-charge detention centre, a Hamburg court spokesperson told DPA. The second is challenging how police banned people from remaining in a certain area during the summit.

Lührs added that more investigations could be launched.

“Experience has shown that the number of investigation procedures will further increase in the next few days,” he said.

“That is an accusation that I firmly reject,” Scholz added.

Officials report that nearly 500 officers were injured amid several days of riots and vandalism surrounding the G20 summit.

While conservative politicians have denounced left-wing extremists for committing acts of violence against officers, police have been accused of using unnecessary force against non-violent protesters as well as violent rioters, including deploying pepper spray and water cannons.

The Association of German Criminal Officers (BDK) wrote in a statement on Sunday that the Hamburg police department's security strategy for the summit “simply did not work”.

“We have simply made a fool of ourselves,” the chair of the BDK, André Schulz, wrote.

In total, 186 people were detained amid the protests and riots, while 225 were taken into police custody. Officials also issued 51 arrest warrants.

According to Die Welt, police have not yet been able to say how many criminal charges have been filed in connection with the G20.

German authorities have also been criticized for suddenly withdrawing the accreditations of 32 journalists set to cover the summit.

On Friday the Federal Interior Ministry said that among those 32 reporters, there were convicted left-wing extremists and a suspected Reichsbürger – a vaguely-associated movement of people who do not consider the German state to be legitimate, often declaring that pre-Second World War (or even pre-First World War) borders still remain.

The Interior Ministry further said that some of the journalists had attracted officials’ attention amid demonstrations for being “extremely violent” ringleaders of the so-called black bloc groups, which are often associated with anarchism.

A ministry spokesperson said that the cases of each journalist barred from the summit will now be reviewed, as well as accusations that the reporters were not told why their passes were withdrawn.

“Of course ideally all information should have been obtained before they got accreditation,” the spokesman said.

Government spokesman Steffen Seibert said that in the run-up to the summit, no accreditation requests were rejected due to security concerns. But on Thursday evening as violence and vandalism increased amid the “Welcome to Hell” demonstration, Seibert said that he received additional security information and a new assessment of the overall situation, leading to the decision to block the journalists.