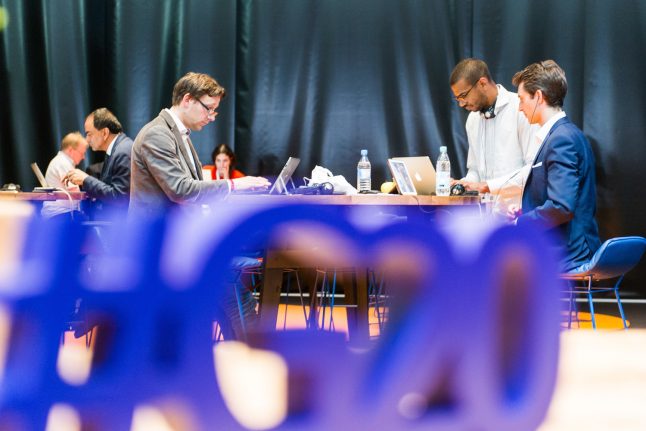 Journalists inside the G20 media centre in Hamburg. Photo: DPA.

The DJV journalists' union demanded an explanation for the “scandalous and illegal” move at the July 7th-8th meeting in Hamburg.

Another media union, the DJU, threatened legal action to shed light on the case, “including the question of what role the domestic security service or foreign authorities may have played in drawing up the list”.

The Süddeutsche Zeitung newspaper reported that the journalists were told “that their accreditations were suddenly no longer valid and that they no longer had access to the secure areas”.

It pointed out that at least four of them had previously run into trouble with Turkish authorities for covering protests and the conflict-torn Kurdish region.

Media rights group Reporters Without Borders said “it would be unbearable if German authorities would restrict journalists in their reporting in Germany because of suspicions, for example, of the Turkish secret service”.

In nine cases, journalists were barred entry to the tightly secured media centre for 5,000 journalists, while the other 23 did not show up.

Cem Ozdemir, co-leader of the opposition Greens Party, called on the government to “tell us whether the process of admission of journalists has been the subject of any form of cooperation with Turkey or Russia”.

But he said that journalists were vetted in collaboration with only the German national police office BKA and that “no foreign authority played a role in the accreditation process”.

Justice Minister Heiko Maas told the Mitteldeutsche Zeitung on Thursday that authorities must give a comprehensive explanation for why the journalists lost their accreditations, stressing the importance of press freedom.

“Therefore the accusations must now be thoroughly clarified,” he said.