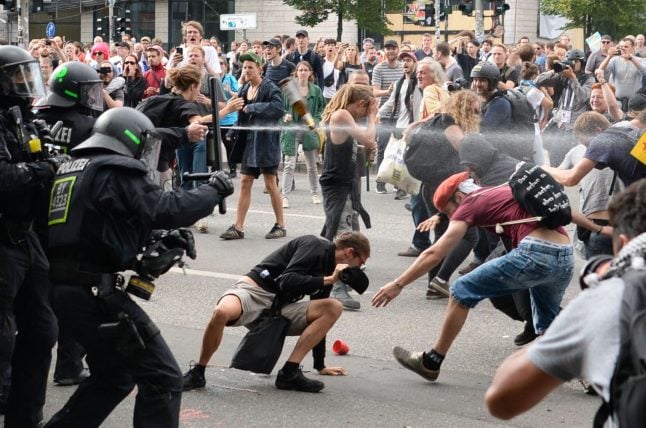 The Association of German Criminal Officers (BDK) wrote in a statement on Sunday that the Hamburg police department’s security concept for the summit “simply did not work”.

“We have simply made a fool of ourselves,” the chair of the BDK, André Schulz, wrote.

Almost 500 police officers were injured in rioting that started on Thursday evening after police halted an anti-capitalism demonstration near Hamburg harbour.

In a commentary piece published in the Süddeutsche Zeitung on Monday, one author wrote that while “the vast majority of officers in Germany perform honestly,” one can also criticize the effectiveness of police actions during the G20.

“Such criticism does not pertain to individual police officers, but rather to those who conceived of the strategy and ultimately gave the orders,” Thomas Hummel wrote for the newspaper.

Hummel noted in particular the “Welcome to Hell” demonstration on Thursday of some 12,000 people, during which police tried to target a group of several hundred masked black bloc individuals, telling them to take off their face coverings. When they did not all comply, police marched into the crowd and tried to separate the black bloc from the rest of the rally.

“It was an act of physical violence, and a step the police legally had a right to take when they saw appropriate. However, it did not pacify the atmosphere right away,” Hummel observed.

He further noted that some experts on large police operations during demonstrations say the strategy used by the Hamburg police did not follow the most up-to-date methods. Police should have, for example, shown more restraint rather than engaging in conflicts when confronted by potentially violent people, Hummel wrote.

Several people The Local spoke to during Friday’s mix of peaceful protests and violent riots expressed dismay at how the police treated anyone nearby more radical elements as if they were also causing problems, at times launching pepper spray or water cannons at anyone in the area.

“At one point it was generally peaceful and then bam – the police went running into the demonstration and the black bloc ran away,” said Hamburg resident Tim. “The people were angry, I was angry. And then came the water cannon and tear gas against everyone.

“The police are not trying to de-escalate.”

At various points during generally calm protests, The Local observed how police would meet aggressive actions by small groups with a harsh response against anyone nearby. In one instance, officers deployed pepper spray along a crowded street towards rock-throwing, masked aggressors. But instead of hitting the rock-throwers, the pepper spray affected other people gathered around a bar on the street, including The Local’s reporter.

“The police leadership and those politically responsible in Hamburg must finally find a de-escalation strategy, instead of constantly criminalizing legitimate and peaceful protests, and hindering them by all means,” wrote Die Linke chair Katja Kipping in a statement.

But German leaders, including Angela Merkel, have defended the police actions, with the Chancellor saying on Saturday that officers had “given their absolute best”.

And members of Merkel’s conservative Union parties instead blamed what some described as a culture of ignoring left-wing violence.

“Years of looking the other way and a mistaken liberality towards criminality [from the far left], has come back to strike us in Hamburg,” said Thomas Strobl (CDU), interior minister in Baden-Württemberg.