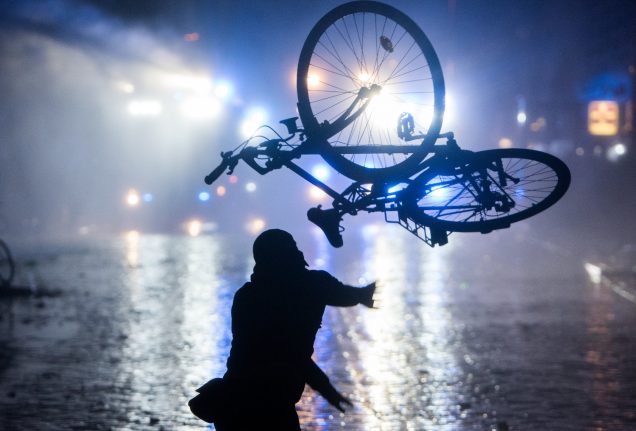 A man throwing a bicycle in the direction of police water cannons on Sunday in Hamburg. Photo: DPA.

A hardcore of militants among mass demonstrations against the Group of 20 meeting had burnt cars, looted shops, erected street barricades and hurled rocks and bottles at riot police during pitched street battles.

In the worst unrest, Friday night in Hamburg's Sternschanze district next to the G20 venue, police commandoes with automatic weapons detained radicals who hurled rocks from rooftops and fired metal balls with powerful slingshots.

“These weren't demonstrators. These were criminal anarchists,” fumed de Maiziere, pointing to the “completely uninhibited violence” that he said in many cases amounted to attempted homicide.

He charged that these militants could “not claim any political motives” but were “despicable violent extremists, just like neo-Nazis and Islamist terrorists”.

The clashes erupted as leaders from the world's 20 biggest developed and emerging economies held a two-day meeting focusing on trade, terrorism, climate change and other key global issues.

Authorities said nearly 500 police officers were injured in a deployment of more than 20,000, and 186 people were detained.

No accurate number for protesters injured was available.

The explosion of violence has sparked pointed questions over how Hamburg could descend into “mob rule” and why Chancellor Angela Merkel chose a city known as a hotbed of anti-capitalist radicals as the venue.

De Maiziere rejected such talk and said Germany would continue to hold large events in major cities because “anything else would amount to a capitulation of the state”.

The German police officers' union GdP on Friday hit out at so-called black bloc anarchists, accusing them of “hijacking peaceful demonstrations by tens of thousands of people to deliberately attack” police.