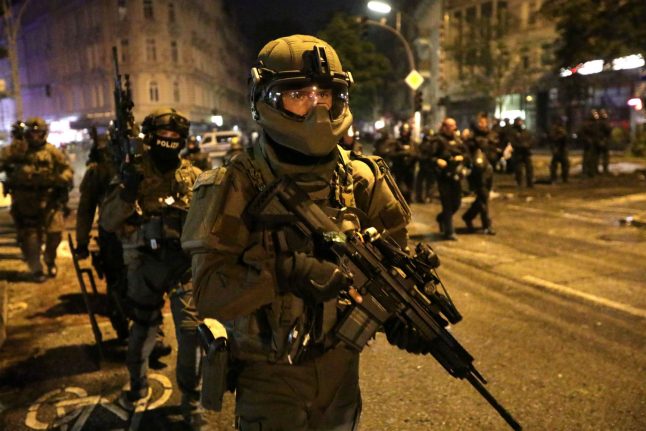 Police in the Schanzenviertel on Friday evening. Photo: DPA

Police responded in huge numbers to the violence, deploying water cannon against the rioters, who defended themselves by constructing burning barricades. Special forces, armed with machine guns, were even called to the scene.

The G20 summit of leaders of 20 of the world's biggest economies started on Friday in Hamburg. Saturday is the final day of the summit hosted by Chancellor Angela Merkel.

According to police, around 1,500 rioters ransacked shops and businesses in the area around Schulterblatt street. Police moved in at midnight, deploying armoured ploughs and water cannons. Photographs from the neighbourhood also show special forces at the scene carrying semi-automatic guns.

Spiegel reports that the special forces were brought in as the police feared that rioters had armed themselves with Molotov cocktails, slingshots and other projectiles.

Police ordered people not involved to distance themselves from the scene of the crimes, as armoured vehicles ploughed the barricades out of the way.

Water cannon vehicles then moved in to disperse the crowd, while officers used pepper spray against groups of rioters. Some of the crowd responded by throwing bottles at the police vehicles.

Hamburg police said they were shocked by the violence, which started on Thursday evening and escalated in certain areas. Shops have been attacked and cars have been burned in several districts of town.

“We have never seen violence and hatred on such a scale,” police spokesperson Timo Zill told Bild.

A group calling itself the “G20 investigative committee”, which is a contact point for demonstrators, blamed Hamburg police for the violent confrontations. Lawyers for alleged rioters arrested by the police have also complained that they did not immediately receive access to their clients.

A total of 197 police officers have so far been injured in the clashes over the past couple days, although none of them have sustained serious injuries, police report.

There have been no official figures given on the number of injured demonstrators or rioters.

A hundred people have so far been arrested in connection with the violence. Several people have now been charged with specific crimes.

Hamburg mayor Olaf Scholz said that “highly aggressive and violent criminals are threatening our security forces and are posing a threat to our open society that nobody should accept.”

Finance Minister Wolfgang Schäuble defended the decision to hold the G20 summit in a large city like Hamburg, saying that when one included delegates, their teams and journalists, 10,000 people needed to be accommodated.

“That’s only possible in a large city that has the required capacity,” he said.

He also came out in defence of the G20 itself, arguing that “the leaders of the major countries” need to come together regularly and talk personally, which he said is “correct, useful and necessary.”