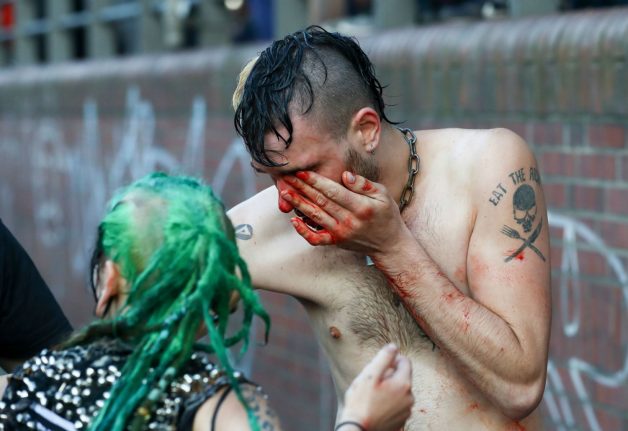 An injured protester in Hamburg on Thursday. Photo: DPA

As I arrived in Hamburg at 8.30am on Friday morning, the city was already buzzing with helicopters overhead, their beating propellers heard almost constantly throughout the inner city.

But small, sporadic instances of violence had already sprung up, such as around the area of Altona. There, cars were lit on fire along the streets Palmaille and Max-Brauer-Allee, while shop windows as well as the glass of bus stop shelters were smashed in, including the windows of Ristorante San Lorenzo.

“We were hit this morning at about 7.30 am –  our neighbour told us that two or three masked people smashed the windows,” the Italian restaurant’s owner, Giorgio Ellero, told me.

Despite broken windows,damage on street, pizzeria owner says: “We'll stay open. We won't let ourselves be under siege” #G20Hamburg pic.twitter.com/oaMVqgYmaN

“Of course you feel angry about what happened. But the G20 shouldn't have happened in Hamburg. The mayor is responsible. He should have thought about whether it was right to have the G20 in Hamburg.

“Now the little people like us are the ones impacted. To me the G20 should not be in a big city, it should be somewhere like an island where people won't be as impacted.

Burned out cars from this morning have become a popular photo op #G20 #HamburgG20 pic.twitter.com/nLzoN5NOfD

“We will stay open. We won't let ourselves be put under siege – we are strong,” he added.

Many others that I spoke to throughout the day expressed similar attitudes: that the violence carried out by the black bloc or “anonymous” groups was wrong, but also that the city almost brought the vandalism and violence against police on itself. The summit’s location at the Hamburg Messe is right next to several areas notorious for the left-wing scene, including the Schanzenviertel, where I was staying.

Getting in and out of this area became a puzzle throughout the day as police blocked off streets as well as U- and S-Bahn stations, attempting to shield the G20 summit from the protesters determined to disrupt it.

Still, the vast majority of protesters for the most part of the day were peaceful, many simply joining in to listen to music and have a beer with friends. There was even a “protest” event on Friday called “Get a Beer”.

Tim, a Dresden native who has lived in Hamburg for six years, said he had not intended to go to the protests, as he had two friends in town visiting. But the G20 security measures blocking off large parts of the inner city, as well as the protests, made it almost impossible to do sightseeing.

“The G20 costs a lot of money, and it shuts the city down,” he said. “I came because I hate this shit. They didn’t ask if it was OK with the people to have this here. If you are against this shit, then you come to the demonstration.

“But it’s also not really a protest because it’s so restricted here,” he added as we stood stuck behind a massive police blockade in the evening on Budapester Strasse, with officers facing off with water cannons against protesters who had started throwing things at them.

At times, small groups of people dressed in black with masks covering all but their eyes (referred to either as “anonymous” or “black bloc” by those around me) would charge up to police and throw objects at officers.

Other protesters described their actions as “shitty”.

“Violence is not a solution,” Anna from Dorsten told me, while carrying signs saying “United We Stand” and “People over profit”. Outside a bar I was sitting in at around 9pm, at the same intersection where the police blockade was taking place, a group of around ten to 15 people darted up to a police vehicle and started throwing large rocks and glass bottles at the van.

The group vanished almost as quickly as they came, but police responded by throwing irritant gas, which hit people smoking and drinking outside bars. A small flood of people came running inside the bar, one woman holding her eyes.

Many people were coughing, and I started to as well. The gas had wafted inside, and the barman shut the door then to block it.

“This is my city,” Elke Dumbsky, a middle-aged woman holding her eyes, told me. “And I wanted to protest against the backgrounds and policies of the world leaders at the G20.”

She said that while her eyes were now fine, her inner chest still burned. We both ordered glasses of water to clear our throats.

Dumbsky also expressed criticism of the police responding harshly towards any protesters who happened to be near more violent elements.

“At one point it was generally peaceful and then bam – the police went running into the demonstration and the black bloc ran away,” he said. “The people were angry, I was angry. And then came the water cannon and tear gas against everyone.

“The police are not trying to de-escalate.”

By the time night started to fall, reports started coming in that nearly 200 police officers had been injured in total over the past couple days, and that the situation in the Schanzenviertel where I was staying was escalating with black bloc protesters forming barriers against police and again vandalizing the area.

The reporters I saw covering what was happening in the streets were decked out in helmets, goggles and other protective gear in case of violence – either from police or the black bloc.

By the time I was able to return to Schanzenviertel in the early hours of Saturday when the situation had died down, I saw the debris of burned garbage, apparent attempts to create barricades out of random items, and the glass from smashed bottles lined the pavement.

On the last day of the summit, a major demonstration is expected, with organizers inviting everyone “to take to the streets of Hamburg… in a loud, colourful and diverse demonstration.”

For shop owners like Ellero, the hope is that “nothing more will happen.”