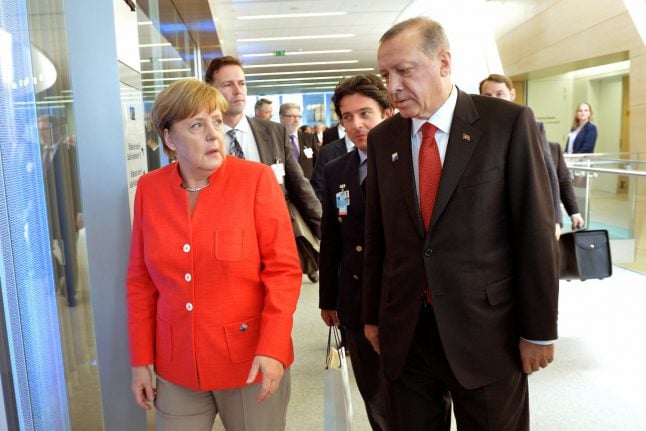 Angela Merkel and Recep Tayyip Erdogan speak amid a NATO summit in Brussels in May. Photo: NATO/DPA

Erdogan's latest outburst came after Germany refused to allow him to address members of the large ethnic Turkish community in a rally in Germany ahead of the G20 summit.

“What kind of mentality is that? That's very ugly. I have never seen anything like that. Germany is committing suicide. That's a political suicide,” Erdogan charged in an interview with weekly magazine Die Zeit.

“Germany must correct this error,” he added, arguing that “he could not be silenced”.

The issue is expected to come up when Erdogan meets Merkel face to face ahead of Friday's Group of 20 summit.

SEE ALSO: Five key issues to know about ahead of the G20

Relations between the two countries have been fraught, deteriorating sharply over Turkey's mass crackdown after a failed coup last year and a host of other civil rights controversies.

On Tuesday, Turkey protested officially to Germany after an artist was allowed to set up an installation in central Berlin offering a car as a prize in exchange for killing world leaders including Erdogan.

The installation was set up outside Merkel's offices on Monday, comprising a Mercedes C-class car and banners with pictures of Erdogan, Russian President Vladimir Putin and Saudi Arabia's King Salman.

Another key dispute centres on Deniz Yücel, a German-Turkish journalist with the newspaper Die Welt who was imprisoned by Turkey on terror charges earlier this year.

And last month Germany decided to withdraw its troops who support the fight against Isis in Syria from NATO partner Turkey's Incirlik base and move them to Jordan after German lawmakers were prohibited from visiting the base.