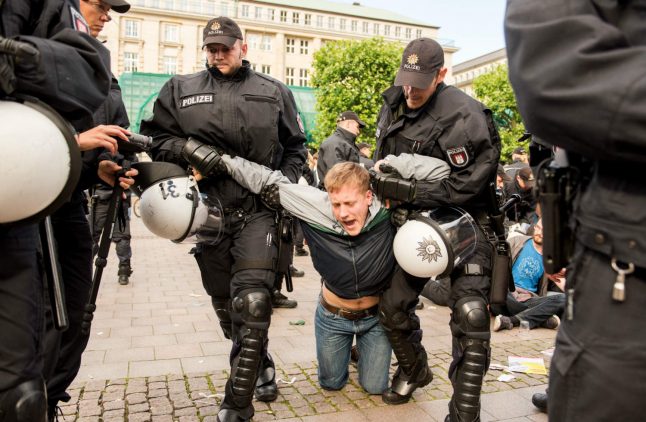 Police breaking up a demonstration in central Hamburg on Sunday. Photo: DPA

“The militant far-left” have decided “to organize the biggest black bloc of all time,” Grote told broadcaster ZDF, adding that this would create a serious challenge for the city’s police.

“But the police are prepared,” he asserted.

Black bloc protests are associated with the anarchist movement and are often marked by rioting around anti-globalization demonstrations.

In 2007 at a G8 summit in Rostock, a black bloc riot led to over 400 police officers needing medical treatment.

“Protest camps are permitted, but not camps in which people stay overnight,” Grote said.

Anti-capitalist protesters vowed on Monday to occupy public spaces across Hamburg with tents, as tensions with police rose days before the German city hosts the G20 summit on July 7th and 8th.

On Sunday police used pepper spray as they cleared tents set up by some 600 activists on the banks of the Elbe river in scuffles that saw at least one protester injured.

More than 30 demonstrations have been scheduled in the days before and during the two-day Group of 20 summit that starts on Friday, guarded by almost 20,000 police.

Protest organizers and the northern city-state of Hamburg have for weeks sparred in the courts over whether activists could set up tent cities with portable toilets, showers and kitchen facilities.

Courts have found that, while such a protest camp would in principle be a legitimate political demonstration, police had the right to prohibit overnight camping on public lands.

Activists calling themselves the “enraged groups of resistance against the G20” charged that police were unjustly characterizing camps as retreats for militants in order to “criminalize legitimate protest”.

In a post on left-wing website indymedia, protesters warned that if they weren't granted the right to camp by early Tuesday, they would “massively occupy parks, open areas and transport hubs of the city”.

Police say they expect up to 8,000 extreme left-wing militants likely to use violence during the protests.