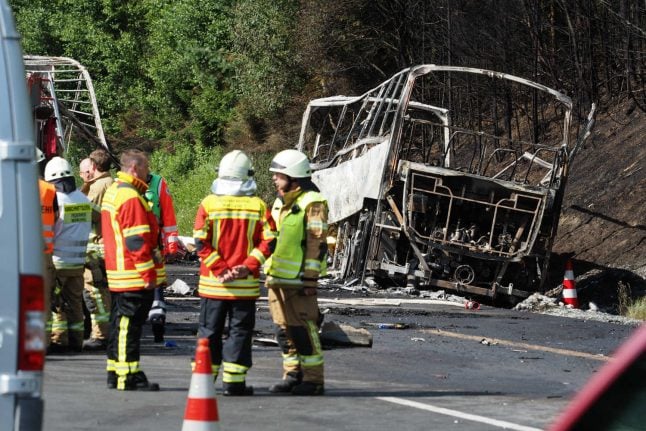 Fire fighters in the scene on the Autobahn 9 on Monday. Photo: DPA

Police and prosecutors on Monday afternoon confirmed that 18 people had died and 30 people were injured, two of whom were in life-threatening condition after the crash shortly after 7am.

The bodies of 15 of the 18 dead had so far been recovered as of about 3:40pm, reported emergency operations leader Reiner Hoffmann. According to police, the victims who died were between 66 and 81 years old

The bus had been carrying 48 people near Münchberg, Bavaria heading for Nuremberg, when it rammed into the truck in a traffic jam on the A9 motorway, Bild newspaper said. The crash sent the bus up in flames, with television images showing only the charred skeleton of the vehicle remaining.

The accident happened near the small Bavarian town of Stammbach, in a region dotted with spas and castles that are popular with summer vacationers.

The flames that engulfed the bus “were so strong that only steel parts are still recognizable on the bus, and from that you can understand what it means for the people on this bus,” said German Transport Minister Alexander Dobrindt.

Police had earlier confirmed that 30 passengers had been taken to hospitals. “Our thoughts go to the victims and their family members, as well as to the injured. We hope that those who have been rescued will recover from their injuries,” said her spokesman Steffen Seibert.

Some of those on the bus came from Saxony, according to the state's interior minister, while Brandenburg's interior ministry also confirmed that at least four came from their state. Dresden's mayor Dirk Hilbert said that some of them had gotten on board the bus at Dresden's central train station.

The accident struck near the town Bayreuth, which draws thousands of classical music lovers every summer to its opera festival.

Around 100 police officers, more than 150 rescue workers and five helicopters were deployed to the scene, while south-bound traffic on the motorway remained blocked.

Officials have posted a phone number for relatives of those missing to call for information, as well as for witnesses to call: 0800 / 7766350.

Bavaria's interior minister Joachim Herrmann condemned the “totally irresponsible behaviour” of some drivers who he said made it difficult for emergency services to reach the accident site.

Herrmann told reporters on the scene that after any accident, drivers should “immediately form an emergency corridor” for ambulances and fire trucks to pass through, though he still noted that “help arrived as fast as possible”.

Emergency crews were able to reach the accident site ten minutes after being alerted, but by then the heat of the resulting fire was so great that no firefighters could approach the bus.

Herrmann said that this situation where the firefighters could no longer help was extremely difficult for the rescue workers, noting that it had started as a minor collision.

Why the fire developed so quickly and had such dramatic consequences must now be examined.

Among the deadliest crashes in recent years was a collision in June 2007, when 13 people were killed as their tour bus drove off the road and plunged several metres down a slope in eastern Germany's Saxony-Anhalt state.

In September 1992, 21 people died when a bus swerved out of its lane and struck a truck before ramming into the road divider in the southern Black Forest region, a key tourist destination.

Across Europe, the last such fatal accident struck on January 21st in Italy, when an accident involving a Hungarian bus carrying teenagers left 16 dead.

In France, a head-on crash in October 2015 between a truck and a bus carrying pensioners claimed 43 lives as both vehicles burst into flames.