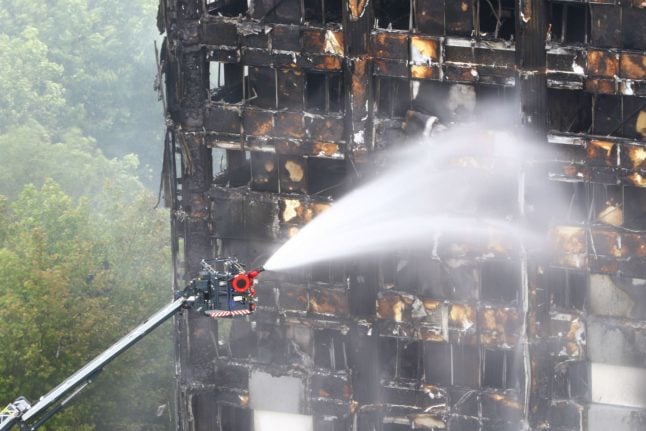 Reinhard Ries, head of the fire department in Frankfurt am Main, said that houses between seven and 22 metres in height were particularly vulnerable to fire.

“We can only hope that the warning shot from London will be taken seriously,” he said.

All houses in Germany that are over 22 metres in height must be built with non-flammable insulation. But houses under that height are often insulated with external wall insulation systems in order to improve their energy efficiency.

Insulation experts, industry groups and politicians claim that external wall insulation systems are safe, when in fact this is not true, Ries claimed.

Frankfurt’s firefighters are seen as particular experts on safety in high rise buildings, as Germany’s finance hub has more tall buildings than any other city in the country.

Seventy-nine people died in the fire in at Grenfell Tower in London earlier in June, after a refrigerator caught fire and the blaze quickly spread through the 24-storey building. The external cladding was widely blamed for the rapid spread of the massive blaze on June 14th.

“I am particularly concerned with checking whether the insulation systems for buildings under 22 metres in height, which are there to fulfil energy saving requirements, pose an added fire safety hazard,” he said.

German authorities on Tuesday evacuated a high-rise apartment building in the western city of Wuppertal, over fire safety fears in the wake of the Grenfell Tower tragedy.

Wuppertal authorities said they had carried out a fire safety review following the Grenfell inferno and found that the insulation on an 11-storey building posed a risk as it is flammable.

“In this case, our experts came to the conclusion that the insulation, made of wood fibres and installed in the 1960s, is flammable and could be a danger,” said Martina Eckermann, a spokeswoman for the city's authorities, adding that the staircases were also difficult to access.

She added however that it was unclear if the insulation is similar to the Grenfell cladding.

Temporary housing has been made available for the block's residents,  who will only be allowed to return home after the potentially dangerous cladding is removed.

Thousands of residents in London have been cleared from 650 flats on similar safety grounds following the deadly London blaze.

But across England alone, some 600 tower blocks are believed to have similar external tiling.

The suspect cladding was installed on the 24-storey council-owned Grenfell Tower, which was built in 1974, as part of a refurbishment completed last year.

But following the inferno, police have found that the insulation did not pass any safety tests.

Earlier Tuesday, British Prime Minister Theresa May promised an investigation into the use of such cladding on British high-rise buildings.

The government has also said the problem may not be exclusive to tall buildings or social housing, and announced it will carry out safety checks on all hospitals and a number of government buildings.