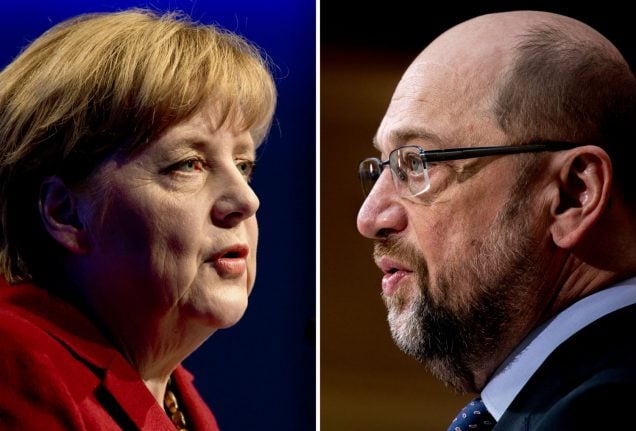 Social Democrats chief Martin Schulz lashed out Sunday at the German leader, saying the famously cautious Merkel caused voters to disengage by refusing to air her views or engage in forceful debate.

“I call it an attack on democracy,” charged Schulz, whose Social Democratic Party (SPD) are now the junior partner in Merkel's right-left coalition.

But Schulz, who also accused Merkel of “arrogance”, was swiftly met with a torrent of protest and accused of having crossed a line.

“Even if Mr Schulz is frustrated by the polls, he should remain measured,” tweeted Peter Tauber, the general secretary of Merkel's Christian Democratic Union (CDU).

“The desperation must never be so deep that democrats accuse democrats of attacks against democracy,” he said.

Tauber pledged that the CDU would pursue a “fair campaign”, adding that “that's what we're expecting from the SPD, too”.

“An election campaign is not a pillow fight, one needs to be concrete. I find that he succeeded in this case,” Oppermann told public broadcaster ARD.

Government spokesman Steffen Seibert declined to comment on issues of party politics but stressed that it was “clear” for the coalition that “we are all working for democracy”.

Schulz revitalised SPD support and enjoyed soaring popularity ratings when he took his party's reins in January, but the trend has since reversed.

Three months before Germany heads to the polls on September 24, the SPD is trailing Merkel's centre-right CDU by 15 percentage points, according to a survey published Sunday by Bild am Sonntag.

After four years in a coalition led by Merkel, the SPD has seen falling support as its left-leaning supporters accuse it of shifting too far right to accommodate the German leader's economically liberal policies.

For Horst Seehofer, who heads Merkel's conservative Bavarian allies the CSU, Schulz's harsh words for Merkel bode ill for the SPD candidate himself.

“It seems a little early in the campaign to have lost one's nerves,” he said, adding that it's “not a good sign for a chancellor candidate but, actually, rather unworthy”.

The head of the pro-business liberal FDP party, Christian Lindner, also waded in.

“When one uses vocabulary as serious as that which Mr Schulz did, then undoubtedly there is a danger of trivialising the real enemies of democracy,” he told the Heilbronner Stimme newspaper.

But Lindner also took a swipe at the CDU over its reaction to Schulz's charge.

“The excitement in the (CDU-CSU) is somewhat disingenuous because it is obviously remaining vague and unambitious for tactical reasons,” said Lindner, whose party is viewed as a potential candidate for a future governing coalition with Merkel's CDU.