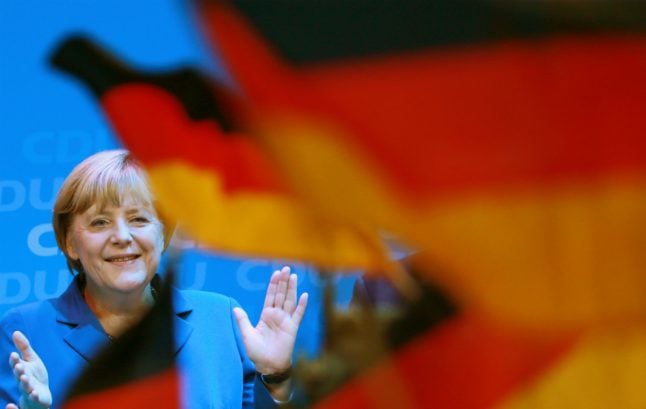 About 100 days before the polls, the Christian Democratic Union unveiled its campaign adverts bearing the slogan “for a Germany in which we live well and happily,” against the flag's black, red and gold colours.

Merkel, who is seeking a fourth term in office, separately penned an open letter published in top-selling daily Bild, spelling out how she sees the A to Z of being German.

The deployment of the German flag is unusual in a country that has largely shied away from outward displays of patriotism after Nazism.

But like other European countries, the question of national identity has emerged as a key issue in Germany's September 24th general election, with the populist upstart party AfD campaigning on the position that “Islam is not part of Germany”.

The decision to campaign with the German flag is also interesting given an episode during celebrations of the CDU's last election victory in 2013, when Merkel took a German flag out of the hand of a party colleague and removed it from the stage.

Amid the refugee crisis, video footage of the scene was shared on YouTube by right-wing nationalists, who claimed it was proof Merkel didn't respect Germany.

Taking the initiative to define what it means to be German, Merkel said in her letter to Bild that it includes C for “Christian-Jewish tradition” and L for “Luther's Bible” but also M for “Muslim” and “migration background”.

Bratwurst, Oktoberfest and the national football team also had a place in her Germany, which the chancellor described as “unity in diversity”.

The CDU's general secretary Peter Tauber acknowledged in an interview with the Financial Times that the centre-right party's campaign “will be a bit more patriotic than before”.

“Because we are in times when right-wing populists are stronger and we don't want to leave patriotism to these people,” he added.

The AfD had won seats in 11 of Germany's 16 states parliaments, surfing on a wave of voter anger against Merkel's liberal refugee policy that allowed 890,000 asylum seekers in Germany in 2015 alone.

The party, which wants family unification of refugees already in Germany halted, is hoping to enter national parliament for the first time in its four-year history.

But its support has recently plummeted as the refugee influx to Germany has slowed, and it is polling at around seven percent nationwide.

Merkel's CDU meanwhile has strongly regained ground, with polls showing it mustering close to 40 percent of support, leaving the second most popular party SPD trailing at around 24 percent.