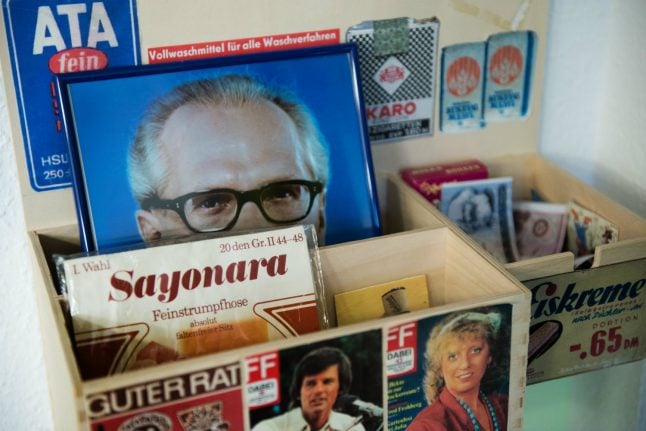 Margit Hikisch, 88, is a resident at the Alexa nursing home in the eastern city of Dresden where pockets of German history are being brought to life to help treat dementia patients.

Using an innovative approach, the private facility has set up “memory rooms” with the decor, meals and music of East Germany of the 1960s and 1970s which, it says, help revive old memories and, with them, the residents' sense of self.

Hikisch survived the war's devastation in Dresden and spent what she calls her “best years” under the communist regime of the German Democratic Republic (GDR) working as a bank clerk.

“Hitler was a madman and we suffered during the war, and afterwards. But in the GDR it got better little by little – we had enough to eat again,” said Hikisch, who, like many her age, has a firmer grasp on decades-old recollections than current events.

As she sat with eight other residents around a long table making a favourite post-war chocolate biscuit cake, Hikisch said she liked visiting the home's custom-made time machine.

“We were always satisfied with what we had (under communism), maybe because we didn't know what we didn't have because of the border,” said Hikisch, referring to Germany's four-decade-long division.

The memory rooms, which began in January 2016, are open every weekday from breakfast until dinnertime.

Zimmer frames and wheelchairs are parked in front of a mini replica of an East German “Intershop” where high quality products such as Western-brand coffee and chocolates were on offer.

A box contains a picture of Honecker that was ubiquitous in the GDR and play money with Karl Marx's bearded visage on East German marks. Residents hum along to cheery old pop tunes coming from a record player.

“Objects from a certain time spark very strong emotions. We are very interested in those feelings because they can be a key to treatment,” he said.

“We noticed that people emerge from lethargy, are suddenly able to butter their own bread rolls, eat and drink more, go to the bathroom on their own and are friendlier and more interested in their environment.”

The original relics of East German life were unearthed on eBay and in flea markets but the care home has now begun receiving donated items as word has spread.

The memory rooms have drawn comparisons with the hit 2003 movie “Good Bye Lenin!” in which a son tries to recreate the fallen East German state for his ailing mother, a dyed-in-the-wool communist who has just awoken from a coma.

The film fuelled a national conversation about “Ostalgie” — nostalgia for East Germany — that took hold among many who found it difficult to adjust to capitalism after the fall of the Berlin Wall in 1989.

Wolfram, who worked for 15 years as a nurse before joining elderly care management, came up with the idea when planning a “movie premiere night” at the home's new cinema.

Hoping to add a little flair, Wolfram found an old East German “Troll” motor scooter on eBay to park in the lobby.

“It almost stole the show,” he said.

“Suddenly the residents knew exactly where to find the brakes and the ignition and recalled their first time taking their girlfriend out for a spin.”

Andreas Kruse, head of the gerontology institute at the University of Heidelberg in western Germany, who is not involved in the Alexa project, said its approach is based on sound research on work with dementia and Alzheimer's patients.

But Kruse, who has researched care for seniors who have lived in repressive states including Holocaust survivors and former Soviet dissidents, cautioned that plunging some patients into the past risked reviving buried traumas.

“Totalitarian systems can leave their mark on people who experienced them as such well into old age,” he told AFP.

“People with dementia are very fragile and often have no way of defending themselves from memories that arise.”

Wolfram, who himself grew up under communism, insists he has no illusions about the regime responsible for the Berlin Wall, the Stasi secret police and the shortage-plagued planned economy.

“We are all happy the GDR is gone,” he said.

“What we have revived instead is a feeling from a certain time in the patients' lives that was marked by objects with which they have a positive association. Part of that is the social cohesion you had in a society where things were scarce.”

Millions around the world are afflicted by dementia, but the condition poses particular challenges to societies with high life expectancy and far-flung families such as Germany, where seniors rarely live with their children.

Wolfram said stereotypes of senior care homes still struck fear in the hearts of most people.

“People still think of a long corridor and residents who get fitted with nappies and have to eat porridge three times a day,” he said.

“We don't want to bore seniors to death – we want to put some joy back in their lives.”