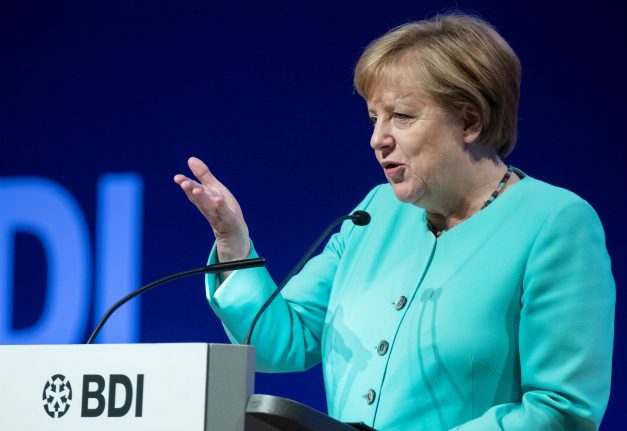 Speaking to business leaders in Berlin, Merkel acknowledged that the “economic cohesion of the eurozone member states leaves something to be desired”.

Merkel, who is running for a fourth term in a September general election, said Germany would be open to an “economic government” to pool “best practices” for promoting jobs and growth among the 19 eurozone members.

“We could of course consider a common finance minister, if the circumstances are right” with the proper balance among risk, liability for debt and the power to dictate policy, Merkel said.

“We could also consider a euro-budget if it is clear that we are really strengthening the structure of the economy and doing sensible things,” she added, backing another suggestion by the French leader.

During his campaign, Macron had put forward ideas for reforming the eurozone, noting that the currency bloc cannot go on as it is if it wanted to avoid falling prey to protest and populism.

Among reforms he wants to see are setting up a separate budget for the group, as well as giving it its own parliament and finance minister.

Macron has forged the beginnings of a strong working relationship with the German leader since his election last month and chose Berlin for his first trip abroad as president.

At a joint press conference, Merkel threw her support behind Macron's call for a “historic reconstruction” of the European Union, even expressing openness to a possible change to key treaties governing the bloc despite some scepticism in Berlin.

The new working group will look at how the currency bloc can better coordinate economic policies, harmonise its tax regime and find potential Franco-German investment projects.

The bilateral panel will report to a joint ministerial meeting of the eurozone's two biggest players in July.