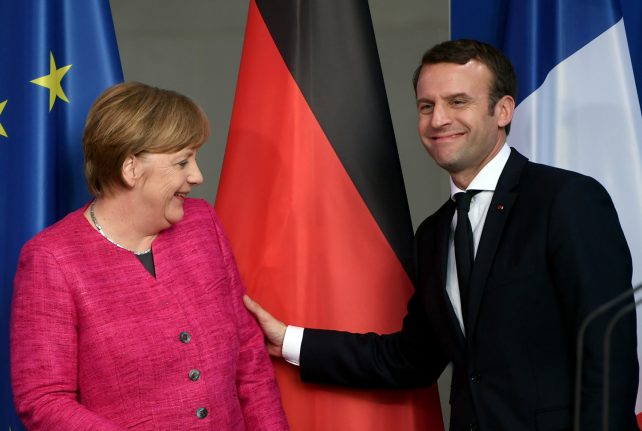 The spokesman, Steffen Seibert, hailed the strong showing for Macron's year-old Republic on the Move (REM) in a tweet, adding that Merkel wished for “further good cooperation for Germany, France, Europe”.

Foreign Minister Sigmar Gabriel also welcomed the vote's outcome, tweeting that it paved “the way for reforms in France+Europe”.

The new president's REM party and its allies MoDem are forecast to win between 355 and 425 seats in the 577-member National Assembly.

The result, if confirmed, would give 39-year-old Macron one of France's biggest post-war majorities, strengthening his hand in implementing the kind of business-friendly, pro-EU programme Berlin has long promoted.

Merkel has repeatedly stressed that it was crucial not only for France, but for Germany, to help Macron succeed.

Macron has forged the beginnings of a strong working relationship with the German leader since his election last month, despite significant differences over several issues including stewardship of the euro.

He chose Berlin for his first trip abroad as president.

At a joint press conference, Merkel threw her support behind Macron's call for a “historic reconstruction” of the European Union, even expressing some openness to a possible change to key treaties governing the bloc.

And earlier this month, they joined forces with Italy to criticise US President Donald Trump's decision to quit the Paris climate agreement, saying the pact was “not renegotiable”.