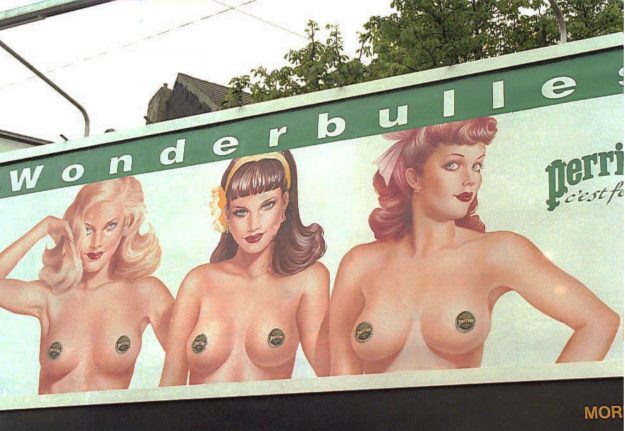 Would this Belgian billboard ad be banned by Berlin authorities? Photo: DPA

In their coalition agreement signing in 2016, Berlin’s “red-red-green” (Social Democrat-Left Party-Green Party) government agreed to ban advertising which sexualizes women on billboards rented out by the city.

Tagesspiegel reported on Monday that the city government is also planning to ban what it deems to be sexist advertising on all billboards.

Whether an advert is sexist or just sexy will be decided upon by an expert set of judges.

In addition, the Left Party has applied for a ban on “mad men” following the oldest rule of their trade in the wealthy western district of Charlottenburg.

Adverts which would be verboten under the Left Party's watch include those that show beautiful women who are simultaneously “weak, hysterical, dumb, insane, naive, or completely controlled by their emotions.”

Other adverts which would no longer be permitted are those in which “a woman is barely dressed and smiling without reason, while a man is completely and comfortably clothed.”

Such adverts give the impression that “the sexes aren’t equal”, according to the Left Party.

The proposal has been supported by the Green Party and the Social Democrats, according to Tagesspiegel.

But the conservative Christian Democrats (CDU) said that politicians “have no right to interfere in the free market.”

The liberal Free Democrats (FDP) meanwhile argue that billboard displays “are protected through laws on freedom of expression.”

The hip district of Kreuzberg-Friedrichshain has already banned “sexist” advertising on 28 publicly owned billboards since 2014.