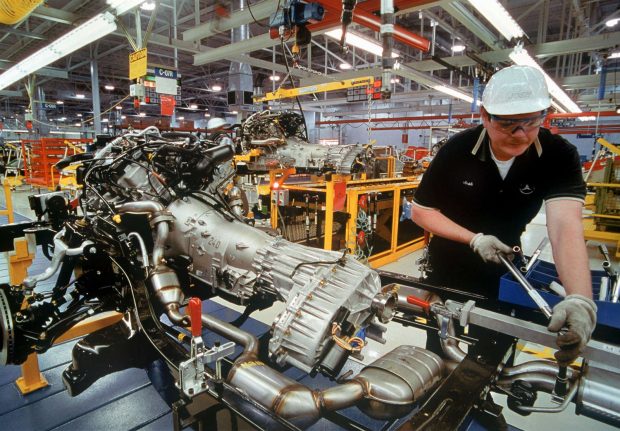 A worker in the Daimler plant in Tuscaloosa, Alabama. Photo: Mercedes-Benz/dpa

But they now face new challenges amid threats of trade wars and the rising influence of Silicon Valley in the auto industry.

In a region of the United States more often identified with the legacy of racism and evangelical Christianity, German and Asian cafes today dot the landscape in Alabama, where Mercedes-Benz, Honda, Hyundai-Kia and Toyota all have plants.

“Lives are being changed,” said Republican Senator Bob Corker of Tennessee, where Volkswagen opened a plant in 2011 that now employs more than 3,200 people.

Veronica Curtis was one of the first 700 people hired when Mercedes started production at its Tuscaloosa, Alabama plant in 1997, joining just five days after giving birth.

“I've never built a car, I didn't know anything about cars,” Curtis told AFP. But 20 years later, Curtis, who is African-American, is a group leader for a team of 60.

“My husband wanted more, and I did too,” she said, recounting trips for the company to India, South Africa and Europe. “If you are good enough, you can move on and I kept moving on.”

Such is the influence of the foreign car manufacturers, that colleges in the South have adjusted their curricula to prepare students for jobs in this sector, including the University of Alabama, which trains engineers for the auto industry.

“We work with schools in our state to make sure that they are working with and they are listening to the companies,” said Alabama commerce secretary Greg Canfield. “It takes a lot of coordination.”

Just about every major foreign brand that sells cars in America has a factory in the southeast. The industry, including auto suppliers, employs 279,620 in the region, about one-third of the sector's nationwide workforce,

according to 2015 US Labor Department data.

Battered by the decline of the coal and textile industries, states such as Kentucky, Mississippi, Tennessee, Alabama, South Carolina and Georgia started to target automakers at the end of the 1980s with an array of enticements including subsidies and deregulatory measures.

Former Kentucky governor Martha Layne Collins was the first to employ incentives with Toyota, said consultant Maryann Keller, whose husband had represented Toyota in the talks.

Canfield said, “The biggest concern for companies is that the regulatory environment is friendly. We want to make sure that we offer the lowest tax rate . . .that we have the right tax reform.”

But South Carolina also modernized its road and rail infrastructure so that BMW could export cars built at its Spartanburg factory through the port of Charleston, 200 miles away.

Another big selling-point to the region has been the virtual absence of labor unions in the region, where most states have “right to work” statutes making it difficult to unionize.

“You look at Detroit and California and you see that union employment has been detrimental,” Mississippi Governor Phil Bryant said. “It drives the cost of manufacturing above what we need to compete with foreign manufacturing.”

Automakers have been successful in keeping big plants union free, turning back campaigns by unions.

But politics poses a medium-term risk to the industry, especially if the fear Trump will follow through on threats to impose tariffs of imports prompts automakers to slow their investments in the region.

Another question mark concerns the rise of autonomous driving and electric-car technology, which is advancing rapidly in Silicon Valley.

“The new electric vehicle plants are being built in the West, not in the South,” said Dennis Cuneo, an attorney at Fisher Phillips, law firm specializing in labor and employment law.

Tesla has signaled plans to expand its plant in Fremont, California, where it already employs 6,000, in addition to the construction of a new battery plant in Reno, Nevada.

Faraday Future expects to build electric cars near Las Vegas and Lucid Motors is investing $700 million in an electric car plant in Arizona.