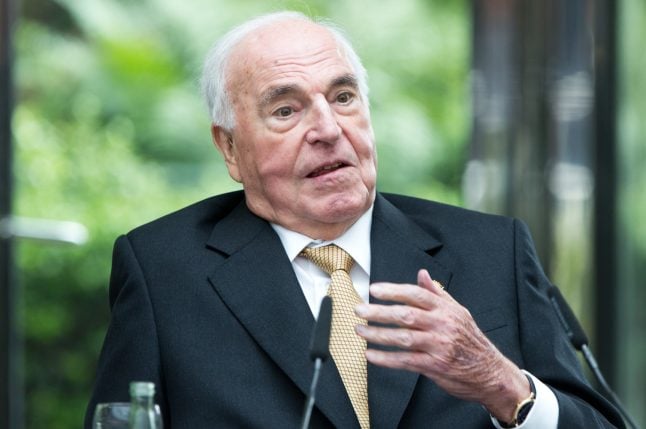 Germany's longest serving post-war leader died in his house in Ludwigshafen, in the western state of Rhineland-Palatinate.

He was Chancellor between 1982 and 1998, having previously served as Minister President of Rhineland-Palatinate. He also reigned as leader of the Christian Democrats (CDU) for almost three decades, from 1973 until his resignation in 2000.

He stepped down as leader of the conservative party in 2000 over an expenses scandal. He refused to give the names of donors to the party to an inquiry into party funding, saying he had given his word of honour, the Süddeutsche Zeitung reports.

His crowning achievement was overseeing the reunification of East and West Germany in 1990.

Former US President George H. W. Bush, who worked with Kohl while in office between 1989 and 1993, issued a statement through his spokesman on Twitter.

“Barbara and I mourn the loss of a true friend of freedom, and the man I consider one of the greatest leaders in post-War Europe,” Bush wrote.

“Helmut hated war – but he detested totalitarianism even more,” he added.

“Working closely with my very good friend to help achieve a peaceful end to the Cold War and the unification of Germany within NATO will remain one of the greatest joys of my life. Throughout our endeavors, Helmut was a rock – both steady and strong. We mourn his loss today, even as we know his remarkable life will inspire future generations of leaders to dare and achieve greatly.”

Herewith the statement by President @GeorgeHWBush on the passing of former German Chancellor Helmut Kohl. pic.twitter.com/ew5pGmqIy0

Kohl was also famous for holding hands with French president Francois Mitterrand at a 1984 memorial service at the sight of the Battle of Verdun, a First World War battle during which close to a million soldiers lost their lives. The gesture was seen as a powerful symbol of solidarity between the two erstwhile enemies.

Rest in peace, Helmut #Kohl. Thank you for your stable yet visionary and historic leadership. pic.twitter.com/DygRKAEIXW

German Foreign Minister Sigmar Gabriel said through his ministry on Twitter that Kohl was “a great German statesman and above all a great European”.

“A great German statesman and above all a great European” – FM @sigmargabriel on the passing of former Chancellor Helmut Kohl https://t.co/DnxiO3icTz

European Commission chief Jean-Claude Juncker paid tribute to Kohl as well, describing him as the “very essence of Europe.”

Helmut's death hurts me deeply. My mentor, my friend, the very essence of Europe, he will be greatly, greatly missed https://t.co/ikJFdzK9m0