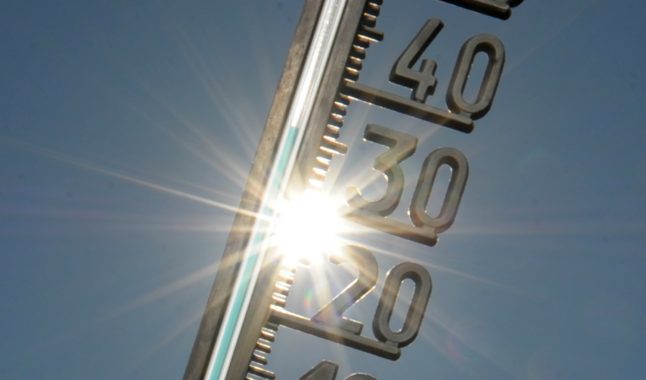 A thermometer in Stuttgart with the sun in the background. Photo: DPA

The German Weather Service (DWD) reports that sea air entering Germany will warm up under high atmospheric pressure and subtropical warm air will spread over the south and southwest over this week. It'll be time to don your t-shirts on Thursday, which is expected to be this week's star of the show temperature-wise. In most places it will be lightly cloudy, sunny and dry.

Temperatures will reach 20C-25C by the coast, elsewhere they will lie between 26C and 30C. Areas along the Rhine will enjoy the warmest temperatures, with a high of 32C predicted. The east of the country will remain dry, but individual showers will develop during the afternoon in the southwest, and in the evening in the west and northwest.

There will be powerful thunderstorms and even hail in very southern areas, south of the Danube river, during the night.

Friday will not be as pleasant as the previous day, bringing changeable weather and heavy clouds in the north and east. Here, as well as in eastern alpine areas, there will be showers and small, isolated thunderstorms. The sun will show itself most often in the southwest and south of the country. Temperatures will fall slightly and sit between 16C and 24C, or up to 26C in southwest.

Like Friday, Saturday is also expected to be changeable and heavily cloudy. The east and southeast will see showers and individual thunderstorms, but these will decrease during the course of the day. Rain will fall in the eastern region of the German Alps. The most sun is to be found in the southwest, where it will also remain dry. Temperatures will increase slightly on the previous day to 17C – 25C, in the southwest up to 27C.

Sunny and dry weather will prevail on Sunday though, with temperatures warming to 22C-25C in the northeast, 26C-30C elsewhere and the southwest hitting 32C.

This temperature increase will continue at the beginning of next week, with the mercury hitting 33C in parts of the country on Monday.

June 20th will see temperatures between 28C and 33C with a mixture of sunshine and cloud and isolated thunderstorms in the afternoon.