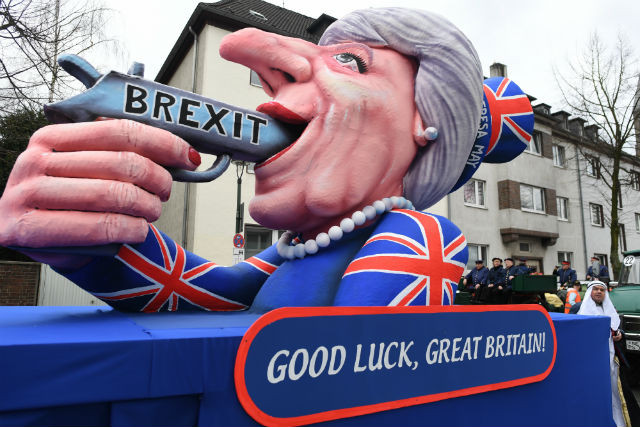 A Carnival float depicting Theresa May in Düsseldorf. Photo: DPA

“The message from this vote is – hold fair talks with the EU and think again whether it is really good for Britain to leave the EU in this manner,” he told reporters, adding that he hoped “a new government will be formed quickly with which we can hold serious negotiations”.

German politicians in the European Parliament meanwhile warned on Friday that time is running out for the UK to start negotiating on leaving the EU, after the country voted in a hung parliament in a snap election.

Manfred Weber, head of Angela Merkel’s Union alliance in the European Parliament, tweeted that “the clock is ticking for Brexit. Therefore the UK needs a government soon. The date for the beginning of negotiations is now unclear.”

The clock is ticking for #Brexit. Therefore the UK needs a government soon. The date for the beginning of negotiations is now unclear.

Reinhard Bütikofer, head of the Green Party in the European Parliament, also voiced his concerns about the effects of the result on Brexit negotiations.
“The time for a sensible negotiation of the British exit from the EU will be very tight due to the unclear leadership situation in the UK,” he said.

German EU Commissioner Günther Oettinger told broadcaster Deutschlandfunk that he saw the start and progression of Brexit negotiations could be now in jeopardy due to the election results, calling for a government to be quickly formed.

“The referendum stands, no one is challenging that,” Oettinger said. “A weak negotiations partner raises the risk of having the negotiations go badly for both sides.”
The EU Budget Commissioner added that he did not believe the election results were purely due to Brexit.
“It's about social equity and security,” he said.
Oettinger also said that he did even think the Brexit referendum last summer was solely about the UK leaving the EU.
“Some votes were not against the EU, but against the situation in the country itself.”
German politicians and commentators also interpreted the UK result as a victory for young pro-European elements within British society.

Michael Roth, Germany’s Europe Minister, tweeted that he was “so proud of young British who voted for Europe, social justice and solidarity! Cheers!”

I'm so proud of young British who voted for #Europe, social justice and solidarity! Cheers! #GE2017

Thomas Sigmund, a journalist at Handelsblatt, tweeted a breakdown of the results by age and said that “this time young voters have chosen Europe and social justice.”

Stephan Mayer, head of the German-British parliamentary group, said that he didn’t believe Prime Minister Theresa May would be able to carry on in her job.

“I find it hard to believe that May will stay leader of her party for long, or that she will be able to hang on as Prime Minister,” he told ARD.

Konstantin von Notz, an influential member of the Green Party in the Bundestag (German parliament), said that May had been undone by her calls to restrict human rights laws in the wake of recent terror attacks in London and Manchester.

“May wants to restrict human rights?! Whoever announces betraying the core of their own values as a strategy has completely lost,” he tweeted.