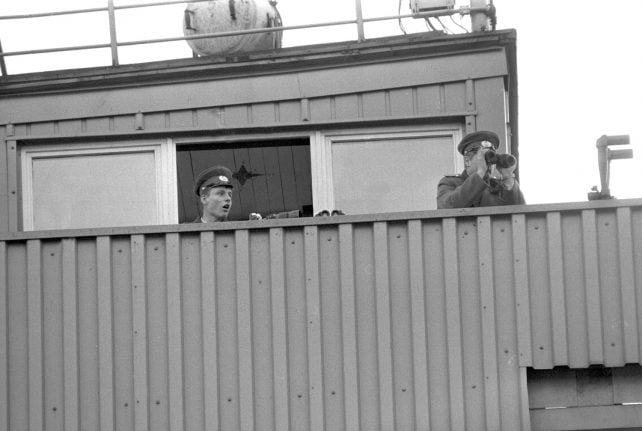 This is the first verifiable count for the number of dead, announced on Wednesday by the research group SED-Staat, referring to East Germany’s sole party, the Socialist Unity Party (SED).

The 327 victims came from both East and West Germany, and the vast majority (80 percent) were younger than 35 years old. The youngest victim was six-month-old Emanuel Holzhauer, who died of asphyxiation next to his parents inside the trunk of a car as they were being smuggled into the West from the GDR (East Germany).

“These borders were, if cynicism is allowed, even more brutal than the Berlin Wall,” said project leader Prof. Klaus Schroeder.

“People who stepped on landmines [at the border] were mangled, some not seen in the undergrowth, and then months later their skeletal bodies were found.”

Another project in 2009 found at least 139 people who were killed at the Berlin Wall, which blocked off West Berlin – geographically located inside the East – from the surrounding Soviet satellite state.

SEE ALSO: The most famous quotes about the Berlin Wall

The new tally includes death up and down the nearly 1,400 kilometre border between the two Germanies.

German Culture and Media Commissioner Monika Grütters said that the new report gives the victims names and faces once again.

“We owe this to the people who lost their lives for freedom and self-fulfilment,” Grütters said.

The researchers meticulously combed through nearly 1,500 potential cases of deaths at the border between 1949 when the GDR was founded to 1989 when the Berlin Wall fell.

The oldest victim was an 81-year-old farmer from Lower Saxony, who in 1967 mistakenly stepped into a minefield.

“Landmines ripped off both of his legs. His slow death lasted over three hours,” the researchers wrote in their study. “He bled to death before the eyes of a GDR regimental doctor, who did not risk venturing into the mined border strip.”

Those who died were not just people who wanted to leave their homes in the East due to persecution or harassment. The experts investigated more than 200 cases of suicide by border officers, at least 44 of which were connected to troops' service.

“This was anything but a homogenous, armed group of troops,” said co-author Jochen Staadt.

“There were very many young, courageous men in the border troops, who refused to use their weapons against civilians.”

Grütters’ office funded the research project with €450,000. Despite multiple requests to all 16 state governments, Schroeder said only Saxony-Anhalt, Lower Saxony, and Hesse also helped the study effort, donating a total of €200,000.

The number of deaths due to the GDR's harsh borders has been a topic of debate in Germany. The Berlin Wall Museum at Checkpoint Charlie last year announced their own estimate to be as high as 1,800 deaths, which Staadt contested.

This discrepancy was in part due to things like the museum counting all border troop suicides, regardless of whether there was a direct connection to their service.

Counting the number of deaths is difficult because the East German government did not keep such records, so researchers had to look through scattered archives.

Still to be thoroughly researched is the number of deaths of GDR citizens who fled over the Baltic Sea, or those who died going through Eastern bloc countries. Currently experts estimate this number to be 200 to 500 people together.

“If people are seeking freedom and self-determination,” said Staadt, “they will not be stopped by walls or barbed wire.”

BERLIN WALL
‘Wall of Shame’: How the Berlin Wall went up 60 years ago
Url copied to clipboard!