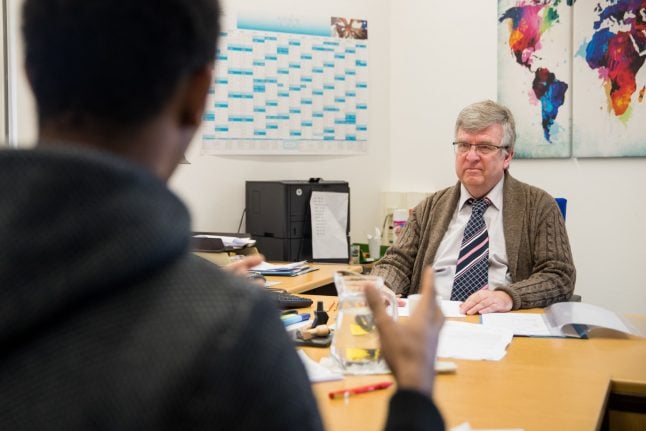 An asylum seeker going through an interview with an immigration worker to check his identity. Photo: DPA.

The Federal Office for Migration and Refugees (BAMF) needed on average 10.4 months to process one asylum case in the first quarter of this year, according to a government response to a parliamentary inquiry released on Thursday.

The German government had previously said that such processes should last about three months, according to Die Linke (Left Party) politician Ulla Jelpke, whose party submitted the inquiry.

The government report further showed that the processes have been getting longer over time. In 2015, the process took 5.2 months, while in 2016 individual processes took about 7.1 months.

BAMF blamed the extended processing times on the increasing number of complex old cases that have been piling up. When officials only consider new cases, the processing time is much shorter: For about 70,800 new applications received between October 2016 and March, the length of time for a decision was about 1.9 months on average.

The amount of time asylum seekers had to wait for a decision also varied greatly by homeland. Those from Guinea on average waited 16.1 months, those from Russia 15.2 months, Somalis 14.9 months, and Nigerians 14.4 months. But Albanians got decisions within 5.6 months on average, Syrians in 7.5 months.

Unaccompanied minors had to wait on average 11.3 months.

The application process is expected to face further delays as BAMF is set to re-examine up to 100,000 positive asylum decisions in the wake of a scandal involving a German soldier who managed to obtain protected status through a fake Syrian identity, despite speaking no Arabic.

The soldier, Franco Albrecht, was arrested in April over suspicions that he was plotting a far-right terror attack with another soldier and a civilian, which the three then reportedly planned to blame on his fake refugee identity.

The case has raised questions about far-right extremism within Germany's military, as well as about the country's ability to properly process the asylum applications of around one million refugees who have entered the country over the past two years.

The Interior Minister said last week that delays could be expected, “but thoroughness comes before speed.”