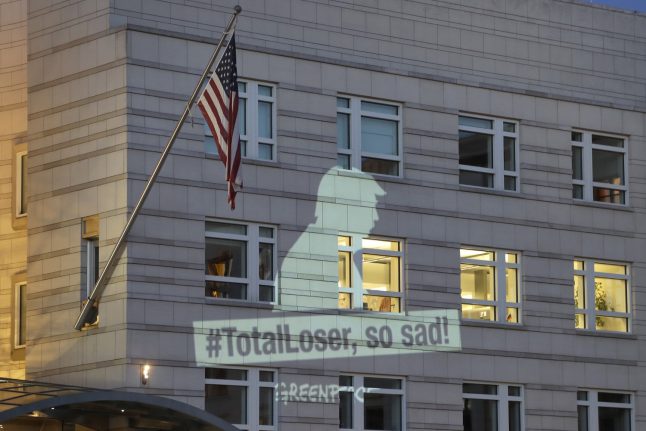 The US Embassy in Berlin after Trump's announcement, with a message from Greenpeace. Photo: AP/DPA

President Donald Trump on Thursday announced his decision to pull the United States out of the 2015 Paris accord, originally signed by 196 nations to reduce greenhouse gas emissions. Trump said he would be open to negotiating better terms for his country.

The decision was not taken lightly by European officials, with Germany, France and Italy issuing a joint statement on Thursday saying the pact was not negotiable.

Chancellor Angela Merkel vowed on Friday to have “more decisive action than ever” to protect the climate after the US pullout from the landmark Paris accord.

“We in Germany, in Europe and the world will band together to take more decisive action than ever to confront and successfully surmount major challenges to humanity such as climate change,” she told reporters.

German media also had strong reactions to Trump’s decision. Before Trump’s formal announcement, several news outlets had already reported what his position would be. In anticipation, tabloid newspaper Berliner Kurier on Thursday ran a frontpage, Denglish headline of “Earth to Trump: Fuck you!”

Magazine Der Spiegel reminded their followers of their cover after Trump was elected in November, depicting his head as a giant flaming asteroid headed to devour Earth. Their headline then: “The End of the World (as we know it),” a reference to the famous R.E.M. song.

The German Green party also decided that the current situation is now Trump against the world, reminding people of the importance of “climate protection, now more than ever.”

Greenpeace Germany also came up with their own way of expressing disapproval, employing Trump’s own rhetorical style and love of Twitter. On Friday the environmental advocacy group projected onto the US embassy in Berlin a silhouette image of the American president with the words “#TotalLoser, so sad!”

The Paris agreement commits signatories to efforts to reduce greenhouse gas emissions that cause global warming, which is blamed for melting ice caps and glaciers, rising sea levels and more violent weather events.

They vowed steps to keep the worldwide rise in temperatures “well below” two degrees Celsius (3.6 degrees Fahrenheit) from pre-industrial times and to “pursue efforts” to hold the increase under 1.5 degrees Celsius.

Since taking office on January 20th, Trump, who has called climate change a “hoax”, had previously sent contradictory signals on the Paris deal.

When asked on Tuesday whether Trump believes human activity is contributing to climate change, White House spokesman Sean Spicer told reporters, “Honestly, I haven't asked him that. I can get back to you.”

But other top Trump advisers, including his daughter Ivanka and Gary Cohn, the head of the president's National Economic Council, were reportedly in favour of staying in the treaty.