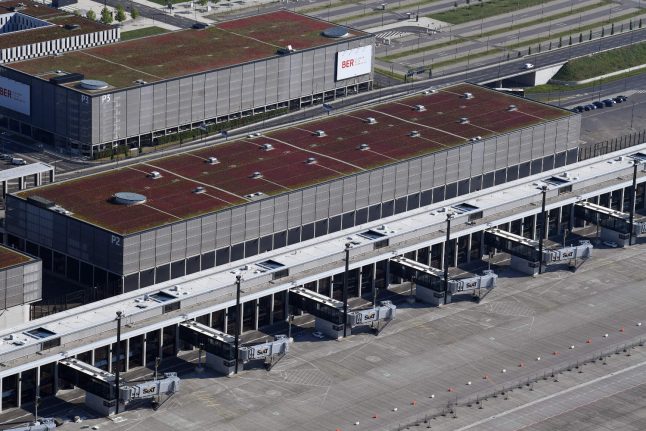 Lufthansa had its planes ready and Chancellor Angela Merkel was lined up for the ribbon-cutting ceremony – all was in place for the opening of Berlin's state-of-the-art airport on June 3rd 2012.

Except the airport itself.

Five years on, and the BER airport remains unfinished, shuttered and a byword for fiasco in a country usually better known for its engineering prowess and obsession with punctuality.

SEE ALSO: The tunnel that will turn central Munich into a building site for a decade

Construction had begun back in 2006 for the mega-project set to replace the German capital's two ageing and saturated airports – Tegel and Schönefeld.

But the opening of BER, on the southern outskirts of Berlin, was scrapped a month before Merkel was due to inaugurate the site in front of 10,000 guests.

The problem related to the fire alarm and smoke extraction system – but it soon emerged that this was far from the only issue.

Besides a litany of technical faults that included a roof twice the authorized weight, there were planning errors, suppliers going bankrupt, and suspicions of corruption.

Meanwhile BER's building costs more than tripled from the €1.7 billion ($1.9 billion) initially budgeted to more than €6 billion ($6.7 billion) to date.

Authorities are running quirky weekly visits to the airport for a fee, but at €10 a head, they are doing little for the bottom line.

While the airport remains shut, its runways are occasionally being used by neighbouring Schönefeld airport, which was once the air hub of communist East Berlin and is undergoing its own renovation.

Other infrastructure linked to BER has to be constantly maintained so it will be ready when the airport finally opens its doors.

To ensure that the rail tracks and stations built for the airport remain operational and free of mould, an empty regional train circulates on the route two nights a week.

The ghost trains will continue their lonely trips until the day the terminal opens, says Deutsche Bahn.

At the nearby Hotel Steigenberger, eight housekeepers and technicians maintain empty rooms – even though the hotel “is not expected to open before the actual inauguration of the airport” according to its operator Deutsche Hospitality.

Travellers booking flights on websites are already offered the choice of landing at Tegel, Schoenefeld or BER – except that those who pick the third choice find no available flights.

On Berlin roads, signs showing the way to the airport are, for now, simply crossed out.

Lufthansa spokesman Wolfgang Weber recalled the day the airport was meant to open, with one of the carrier's Airbus jets set to be the first on the tarmac.

Germany's largest airline had a “big plan” to bump up the number of direct flights from Berlin to other destinations from eight to 45.

Tickets were sold, planes readied and personnel hired, he said, but “step by step, we cut down this flight plan”.

Today, Lufthansa and its subsidiary Eurowings link Berlin to 30 destinations from Tegel airport, and the carrier has kept BER off its flights plans for coming years.

“We need a date – and to have that date at least a year in advance,” said Weber.

But to avoid yet more embarrassment, authorities have not set a new date.

Thomas Winkelmann, the boss of Air Berlin, has acknowledged “the limits of Berlin in terms of infrastructure”.

In April – despite the carrier's name – he decided to boost the western city of Düsseldorf as a base for its long-haul flights.

For now, BER is a running joke among Berliners.

Some have suggested the sweeping and deserted site as a possible nuclear waste storage site.

Others, picking up on the Internet meme of “Chuck Norris facts”, say only the reputedly omnipotent US martial arts film hero can rescue the project now.

One joke reprised former East German leader Walter Ulbricht's notorious denial in 1961 that the communists were going to erect a wall around West Berlin – “Nobody intends to build an airport.”

The football club Darmstadt, after its relegation following a loss to Hertha Berlin, sniped at its adversaries on Twitter that “we landed in League 2, but you are still landing at Tegel”.

Even Germany's usually dour finance ministry joined the fun in a video presenting Germany as this year's G20 summit host, with an image of the airport and the admission “we are not perfect”.