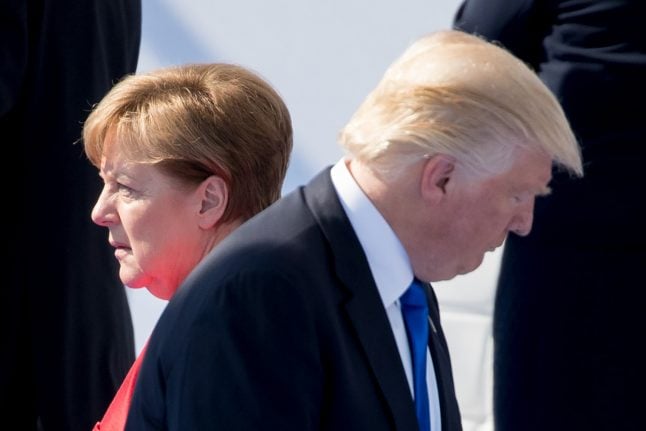 Angela Merkel and Donald Trump in Brussels for a NATO summit. Photo: DPA.

“We have a MASSIVE trade deficit with Germany, plus they pay FAR LESS than they should on NATO & military. Very bad for U.S. This will change,” Trump wrote.

We have a MASSIVE trade deficit with Germany, plus they pay FAR LESS than they should on NATO & military. Very bad for U.S. This will change

Chancellor Angela Merkel meanwhile signalled that the European Union needed to take control of its destiny given the course of Trump's presidency thus far.

“Transatlantic ties are of paramount importance to us… but the current situation gives more reasons for… us to take our destiny in our own hands,” said Merkel, stressing that “Europe must become a player active in international affairs”.

Merkel had made waves on Sunday when she told a rally in southern Germany that the United States and Britain may no longer be completely reliable partners.

READ ALSO: Merkel warns that US is no longer reliable partner

A day later, Foreign Minister Sigmar Gabriel also lashed out at Washington, saying the Trump administration's “short-sighted policies… stand against the interest of the European Union”.

Germany's startling assessment came after Trump's first tour abroad, when he snubbed pressure from G7 allies to sign up to upholding the 2015 Paris climate accord.

The US leader also berated 23 of NATO's 28 members – including Germany – for “still not paying what they should be paying” towards the funding of the alliance.

Despite her dismay at the direction Trump is taking, Merkel was also at pains to underline the importance of US relations.

She dismissed any talk that Germany was shifting away from its old ally and pivoting East, after she hosted Indian Prime Minister Narendra Modi for talks and with meetings planned later this week with Chinese Premier Li Keqiang.

“We began our German-Indian government consultations a few years ago, as we have for German-China consultations,” she said.

“We live in a globalized world and India … is a partner,” she said, adding that “in no way do other relations stand against transatlantic ties, which are of paramount importance”.